As most comedy performers and writers would agree, getting laughs isn’t an exact science. But Jack Oakie, who excelled at eliciting chuckles from film, television, radio and vaudeville audiences will now have his name permanently linked to the academic study of comedy through the establishment of the Jack Oakie Endowed Chair in Comedy at the School of Cinematic Arts. 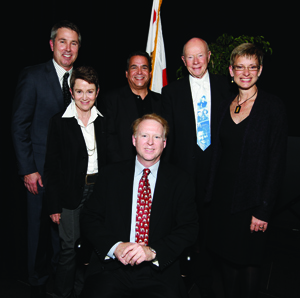 A ceremony held on November 9 honored the inaugural holder of the endowed chair, Division of Writing for Screen & Television chair Jack Epps Jr., and featured remarks by Epps, Dean Elizabeth M. Daley, and Provost Elizabeth Garrett, as well as a keynote address from director/producer/writer and USC alumnus Peter Segal.

“We are eager to have our students join a remarkable lineage that includes Aristophanes and Swift, all the way up to our alumni, Apatow, Reitman, Roach and Segal,” said Daley. “Jack Oakie was, of course, an indispensable part of that lineage, and we at the School of Cinematic Arts are all honored to be linked with his name in perpetuity, and his remarkable body of work.”

Calling it a “full circle moment”, Epps recalled his experience with Oakie’s films as a child in Detroit.

“I didn’t know I was getting an absolutely first class education in film, but I was,” said Epps. “One of the characters I grew to love was this funny, happy-go-lucky guy who had a ton of heart and usually the best lines in the film. He was Jack Oakie. I didn’t know he was Jack Oakie. I knew he was just this guy I liked, and was happy whenever he popped up in a film.”

Epps also formally announced a new concentration of interdivisional classes with a comedy emphasis, called Comedy@SCA. Working with Emmy-winning faculty members David Isaacs and Barnet Kellman, over the next few years, Epps plans to create “a unique environment where students can come to study, find their comic voice and hone their skills in writing, performing and directing comedy.”

In Segal's keynote address, he acknowledged that comedies often do not get the respect that other genres receive, but pointed to comedy’s box office dominance and its ability to forge connections with viewers.

“Comedies are cinema’s step children,” said Segal. “Maybe not front and center in the family portraits of film history, but the ones in the back row, who’ve been grounded and missed a couple meals, to whom we always turn to cheer us up on a bad day.”

“I promise you, if we took a tour of some dorm rooms on campus, beside the posters for Scarface, and Taylor Lautner without a shirt…you would find one sheets for Animal House, Caddy Shack, Some Like It Hot, and Dr. Strangelove. Comedies,” said Segal. 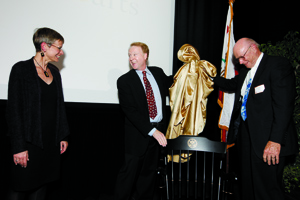 The unveiling of the Jack Oakie Endowed Chair in Comedy

Happy to take the roars of audiences over critical acclaim, Oakie cast a broad shadow in the entertainment industry, working successfully in a variety of media. Following his professional debut on Broadway in 1923 as a chorus boy in Little Nellie Kelly by George M. Cohan, Oakie made his first Hollywood “talkie”, The Dummy, in 1929. Quickly making a name for himself as a versatile comedian, comfortable with slapstick and satire, Oakie appeared in 87 films. His performance as Benzino Napaloni in Charlie Chaplin’s 1940 satire of fascism, The Great Dictator, earned him an Oscar nomination for Best Supporting Actor.

Oakie and his wife of 38 years, actress Victoria Horne Oakie, were longtime friends of USC. The actor had shot many of his collegiate films on campus, and he was a regular fixture at Bovard Field. After his passing in 1978, Horne Oakie remained an ally of the school, bequeathing Oakridge, the Oakie residence for over 60 years, to provide the resources to fund the endowed chair. In addition, the Jack Oakie and Victoria Horne Oakie Charitable Foundation provides student support and annual funding for the Jack Oakie & Victoria Horne Oakie Masters Lecture Series, begun in 2008. To date, 45 Oakie scholarships have been awarded to SCA students across all six of the school’s divisions by the Foundation.