With hundreds of students, alumni, faculty, and supporters on hand, USC’s cinema program made history on October 4, celebrating a record-breaking $175 million gift from George Lucas’ Lucasfilm Foundation that will fund new buildings and launch a major endowment campaign. 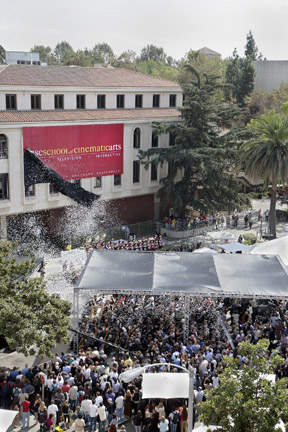 In addition to creating a new home, the institution also received a new name: The USC School of Cinematic Arts.

“Though ‘cinematic’ was often understood in the 20th century as dealing with movies, in this century it is taking on a much broader context, looking beyond the media,” said Lucas. “I believe that the new name of the school embodies the movement of the industry and the art form, and positions all who learn here as leaders not just for the moment, but for generations to come.”

Lucas, who graduated from the cinema program in 1966, was joined by luminaries from entertainment, higher-education and politics, including filmmakers Steven Spielberg and Robert Zemeckis, USC President Steven B. Sample, Dean Elizabeth Daley, Board of Councilors Chair Frank Price and Los Angeles city councilmember Bernard Parks, who declared October 4 “USC School of Cinematic Arts Day” in the city of Los Angeles.

“We are grateful that Mr. Lucas has chosen to share his passion for film and emerging technologies with a new generation of students at USC,” said University President Steven B. Sample before officially announcing the new name of the school. “On behalf of the entire University of Southern California community, I should like to thank him for helping us turn the dreams of so many young men and women into reality.”

The largest private donation ever received by the university will be put to good use, with $75 million being put toward the overall $100 million needed for the new complex. The $100 million portion of the gift will go toward support initiatives in four core areas: students, faculty and staff, technology and programming, and alumni outreach. The gift will also serve as a major catalyst for the school to reach the $200 million goal of its current endowment campaign.

“Supporting higher education is truly an investment in the nation’s future, and this is an amazing opportunity to affect cinematic arts students in perpetuity as they build upon their training at the school to become masters of their fields,” said Dean Daley. “Together we can ensure that the school continues to be the preeminent educational institution for film, television and interactive media.” 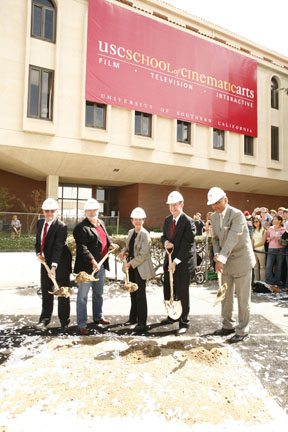 Phase one of the new facilities is slated for completion in December 2008. When it comes on line the facility will provide a state-of-the-art teaching and production environment for its current students, faculty and staff, as well as create room for expansion in the years to come.

Among its resources will be eight screening rooms, including a 200-seat theater, a 100-seat theater, two 80-seat theaters and four 40-seat theaters; community spaces such as a café and central plaza; and collaborative spaces where groups of students, faculty, staff and invited guests can gather to exchange ideas, demonstrate prototypes, review productions and cooperate on initiatives.

The new facilities will replace the current instructional building, which students, faculty and staff have been using at 120 percent of its original design.

Beyond the practical considerations that went into the design of the complex such as classroom and production space, the new facilities will also reflect the tremendous growth of the cinematic arts—film, television, and interactive media—both from a technological as well as a programmatic vantage point. In the last decade alone, the school has added two new divisions, as well as new degrees and minors at the undergraduate and graduate levels. The program also added new faculty, many of whom are holders of the school’s record-breaking 13 endowed chairs.

“Today is not just about new buildings,” said Jack Epps, Jr., acting chair of the Division of Writing for Screen & Television. “It’s about allowing the school to stay relevant to the world of media and it represents not only a greater teaching facility but also a state-of-the-art institution where we can stay abreast of the latest technologies.”

With the new facilities still in the future, students seemed thrilled just being a part of the celebration. “It’s so funny to think how my friends and I have laughed at the idea of the old film school in the ‘stables,’ and how the students in the new building will probably feel the same way looking back at the current building,” said writing junior Jessica Brownell. “There’s definitely a sense that big things are about to happen, and it’s so exciting to think that we get to be a part of a new era for the school.”