Outside the Box [Office], SCA Alumni Screening Series, and Samuel Goldwyn Films, invite you and a guest to a special preview screening of 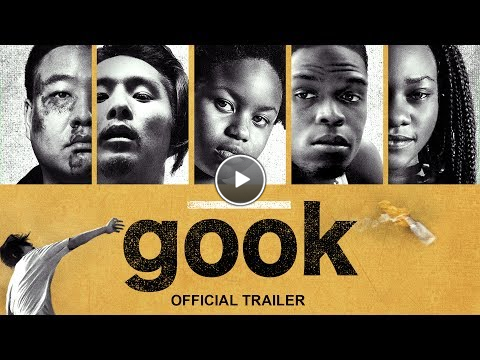 Eli (Justin Chon) and Daniel (David So) are two Korean American brothers that run their late father’s shoe store in a predominantly African American community of Los Angeles. These two brothers strike up a unique and unlikely friendship with an 11-year-old African American girl, Kamilla (Simone Baker). As Daniel dreams of becoming a recording artist and Eli struggles to keep the store afloat, racial tensions build to a breaking point in L.A. as the “infamous” L.A. Riots break out. Over the past several years, there has been a lot of talk about diversity, but that's all it has been, TALK.

As an artist, I believe that my true contribution to the issue of diversity is to create films I feel are important to the Asian American narrative. So for the past few years, my mantra has been create, create, create.

While I was developing Gook, I asked myself what was important that I represent. First and foremost, I wanted to show regular guys I knew growing up. The 2 brothers in the film are simply blue collar working class Korean Americans with no ambitions other than to survive and make a living for themselves. They have no aspirations to run a Fortune 500 company, no desire to go to an ivy league or make enough to live in the suburbs. I grew up with many of these guys, yet in traditional media, Asian Americans are portrayed as being great students, intelligent, and very skilled at math. HAHA. While those traits are amazing, they do not represent the entirety of our community.

Through this project, I was able to represent two of the most underrepresented minorities in film… Asian American men and African American females. When I had the choice of either making my lead character a male or female, I found it to be a great opportunity to write in a resilient African American girl. My goal was to give the characters real wants and needs through three dimensional portrayals.

Another aspect traditional films don't address is the rift between the older and newer generations of Asian Americans. I wanted to show that even within our own ethnicities, we don't always get along. Hence the relationship between the boys and the liquor store owner across the street, Mr. Kim.

2017 is the 25th year anniversary of LA riots. It has been 25 years since the verdict of the Rodney King trial was read and things haven't gotten much better and in some ways, they have gotten worse. My father, Sang Chon, who plays Mr. Kim in the film, experienced the riots first hand. He had a store in Paramount, which was looted on the final day of the riots. I'm certain other films about the riots will be made, but I thought it was absolutely imperative that the Korean experience be told. Often times our struggle and loss during this event is not publicized and overlooked.

I feel it is my duty to honestly tell our story in a unique way and this is my contribution to what we Koreans experienced during those days in April 1992.

Justin Chon was born in Orange County, CA, and has worked as an actor for over 15 years. As a writer/director, his first feature film, Man Up, was distributed by Lakeshore Entertainment. He loves longwalks on the beach and reading novels by candlelight.

Simone Baker is a Los Angeles based actor and singer. Born in Chicago, Simone’s love for music and singing was noticed early by family and friends. Her mother’s involvement in the city’s theater scene planted the seed for Simone’s love of acting. At the age of four, Simone moved to Los Angeles with her mother, where she went on to appear in several commercials and short films. She also performed in several theater productions, including an adaptation of Frozen as the lead, Elsa.

Her big acting opportunity came soon after with the film, Gook. The director, Justin Chon, and producers, James Yi and Alex Chi, sought out the film’s lead character, Kamilla, from the Fernando Pullum Community Arts Center, where Simone was introduced to them by the director, Mr. Pullum. She was cast that same afternoon as Kamilla, which also happened to be her birthday.

Since playing Kamilla in Gook, Simone has continued performing. She attends a performing arts middle school where she showcases her singing and dancing. She has also performed in other local musical theater productions such as The Wiz. She was honored to guest star as Flora Harris on the season 6 finale of American Horror Story: Roanoke directed by Bradley Buecker. Simone also voices the character "Puppy Sugar" in the soon to be released animated feature, A Dog's Dream directed by Kenny Roy. In addition to performing, Simone loves to read, sew (especially clothes for her stuffed animals), draw, paint, bake, and of course eat good food.

Ante Cheng is a cinematographer from Taipei. His narrative works include Gook (Sundance 2017 NEXT Audience award) and Afuera (LA Film Festival 2016). He started off filming music videos (15+ million views) and commercials (Microsoft, Lexus, Samsung). Currently, Ante is a third year MFA student at USC, and he is looking forward to make movies that inspire.

The School of Cinematic Arts invites you to an exciting free screening series featuring a dynamic selection of new feature films by SCA alumni and faculty throughout 2017. All screenings and events will be free of charge and open to the public, although we do ask for an electronic reservation for each screening, which can be made through the website for each individual screening.