Director of The Empire Strikes Back 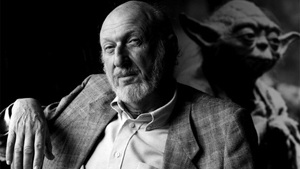 SCA alumnus and faculty member Irvin Kershner, who directed the Star Wars sequel, The Empire Strikes Back and the James Bond film Never Say Never Again, died at his Los Angeles home following a three and a half year battle with lung cancer. He was 87.

“In losing Irv, we have lost a truly great filmmaker, and we are all deeply saddened,” said Dean Elizabeth M. Daley. “He was a phenomenal storyteller and an insightful teacher, and his contributions both to the entertainment industry and this school cannot be overstated.”

Kershner was born in Philadelphia in 1923, and grew up an avid musician, studying violin, viola and composition. After attending the Tyler School of Fine Art at Temple University, he went to New York and Provincetown to study with renowned painting teacher Hans Hoffman. Later moving to Los Angeles, he studied photography at the Art Center College of Design, and film at the USC School of Cinematic Arts, under Slavko Vorkapich. A position as a still photographer for a State Department film project in Iran ultimately led to Kershner being assigned to direct and shoot documentaries for the United States Information Service, working in Greece, Turkey and the Middle East.

After developing and serving as writer, director, cinematographer and editor on a documentary series called Confidential File, Kershner got his first movie break in 1958, directing, writing and co-producing (with colleague Andrew Fenady) the Roger Corman-financed low-budget feature, Stakeout On Dope Street. The film was shot by Haskell Wexler and edited by SCA professor and alumnus Mel Sloan.

Working in a wide variety of genres in both film and television, Kershner directed The Hoodlum Priest, A Fine Madness starring Sean Connery, the John Carpenter-scripted The Eyes of Laura Mars with Faye Dunaway, Robocop 2 and many others. He was also an occasional actor, playing the priest Zebedee in Martin Scorsese's The Last Temptation of Christ.

Kershner was known for bringing range and complexity to films like Empire, the Emmy-nominated Raid on Entebbe, and Loving, starring George Segal and Eva Marie Saint. In a recent interview published in Vanity Fair, Kershner spoke about his experience on the seminal second film in the Star Wars series. 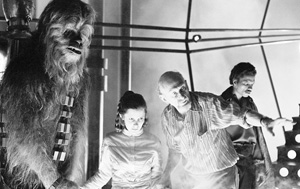 Kershner on the set of Empire Strikes Back, with Peter Mayhew, Carrie Fisher and Billy Dee Williams. (Lucasfilm/MCT/November 22, 2010)

“When I finally accepted the assignment, I knew that it was going to be a dark film, with more depth to the characters than in the first film,” Kershner said. “It took a few years for the critics to catch up with the film and to see it as a fairy tale rather than a comic book.”

In June of this year, Kershner received a lifetime achievement award from the Academy of Science Fiction, Fantasy and Horror Films. SCA alumnus and executive producer of Empire, George Lucas wrote Kershner, saying, “The Star Wars story has had to evolve to stay fresh, and it took a filmmaker like you to make that important step in galaxy building.”

“He was an extraordinary mountain of a man with whom I'm proud to have shared the world of art," said Billy Dee Williams, star of Empire. "I bet he's smiling at us right now with that wonderful impish smile.”

Derek Maki of Coolwaters Productions, LLC, Kershner’s agent, said, “Kersh loved his fans around the world and appreciated the recognition he still received three decades after the release of his landmark film, The Empire Strikes Back.”

Kershner continued to produce and write in recent years, teaching at SCA and lecturing around the world. His fine art photographs have been exhibited in New York, San Francisco and Mexico, as well as in a permanent exhibition at the LAC+USC Medical Center.

Famed speculative fiction writer Ray Bradbury, who was the subject of a documentary Kershner had been working on at the time of his passing, spoke warmly of the director.

“Kersh was an amazing man, a good friend, and I loved him with all my heart,” said Bradbury.

At Kershner’s request, there will be no funeral. He is survived by two sons, David and Dana. For more information about Kershner’s life and work, visit www.irvinkershner.net.