Danger Copter to the Rescue 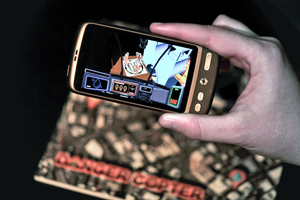 “Augmented Reality, especially AR gaming seems really poised to take off right now with so many smart phones in the market,” said Interactive Media student and Danger Copter designer Kedar Reddy. “We're all essentially carrying computers that are nearly as powerful as our laptops in our pockets, so it's time we really take advantage of their capabilities and catch the art up with the technology.”

“Danger Copter was a blast to work on, because it was a project between close friends, said Interactive Media student and Danger Copter designer Jason Mathias. “We were going against companies built around making AR games, so we definitely felt like underdogs, and it was really rewarding to hear that we'd won third.”

In the game, the player assumes the role of a helicopter pilot who extinguishes fires with a water hose and rescues stranded people.