The Women of Cinematic Arts held their first WCA Film Festival on Saturday, February 5th at the School of Cinematic Arts. The event featured eight short films and a screening of Sundance darling On the Ice with a Q and A with Lynette Howell, the producer of the film. 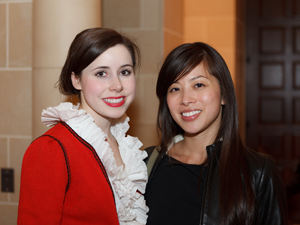 “The talent and professionalism of these young women is quite remarkable,” said SCA Director of Development Ann Spurgeon. ”Each film was unique and told an interesting story in under twenty minutes. I was very pleased at seeing the standing room only crowd and the diversity of the audience. Many short festivals leave a lot to be desired, but I felt that each film shown was wonderfully done.”

The Women of Cinematic Arts was founded in 2005 and provides networking and mentoring opportunities for University of Southern California students and alumni.

“The WCA film festival was a wonderful celebration of collaboration among female filmmakers,” said WCA Alumni Co-chair Genevieve Farrell ’10. “As an actress and a writer, it is so inspiring to showcase such a high quality of films! The full theater and reception provided a great opportunity to meet your fellow filmmakers.”

More information can be found at www.uscwca.org.