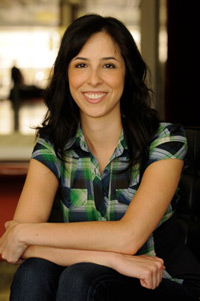 Erin Levy '05 whose Mad Men
episode "The Chrysanthemum and
the Sword" won the WGA Award for
Best Episodic Drama.

The 2011 Writers Guild of America Awards was a big night for the SCA family with two wins for Erin Levy ‘05 for her work on Mad Men and one win for Matthew Weiner ‘90 who executive produces the show. Levy’s episode, “The Chrysanthemum and the Sword” won for TV Episodic Drama and Mad Men won for Best Drama Series.

“Mad Men demonstrates the skills that are the focus of our program; character, storytelling and the development of the writer’s own voice,” said Mary Sweeney, interim chair of SCA’s Writing Division. “Matt and Erin stand as models of success for the young women and men in our division.”

This WGA Award is the second for Levy and the third for Weiner. Weiner is a five-time Emmy winner for his work on Mad Men and The Sopranos and Levy received her first Emmy last year for her Mad Men episode “Shut the Door, Have a Seat.”