CEO Named as Ambassador for Humanity

A spray of stars and supporters of the USC Shoah Foundation Institute came together on Dec. 9 in Hollywood’s famed Kodak Theatre to honor American film producer, CEO of DreamWorks Animation, philanthropist and humanitarian Jeffrey Katzenberg. 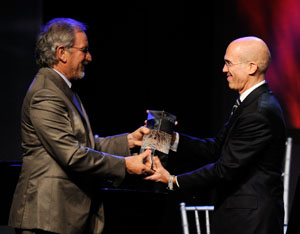 Steven Spielberg and  Jeffrey Katzenberg at the Shoah Foundation's presentation at the Kodak Theatre.  Photo courtesy of WireImages

Steven Spielberg, founder of the USC Shoah Foundation Institute and honorary chair of the Institute, likened Katzenberg to Jimmy Stewart’s character George Bailey in Frank Capra’s classic film It’s A Wonderful Life. “Without Jeffrey as a part of our collective lifetimes,” he said, “I shudder to think of what Hollywood would be like today,” he said.

Spielberg called Katzenberg a true visionary who along with his family is a firm believer in the word “yes.” He cited a long list of his philanthropic leadership roles in the United States and around the world where he has been a champion of charitable movements.

When receiving his award, Katzenberg spoke of Spielberg’s seminal film Schindler’s List and the wonderful after effects including the establishment of the Shoah Foundation. “He dramatically demonstrated how art can lead to action through the foundation that documents, in excruciating detail, to mankind the facts that can never be denied, distorted or dismissed.”

Calling the 52,000 testimonials in the Institute's archive a powerful and profound and permanent shout of never again, Katzenberg said that along with the cry “never again,” in his mind it is “ever again.”

“Ever again in large and small ways people rise to the challenge and push back the darkness that happened in camps, battlegrounds, in attics and hiding places,” he said. “Ever again good people do what is right and the world inches forward. Ever again we see it around us today in soup kitchens, the Haiti relief effort, and the fight against AIDS.”

Katzenberg said that he was both inspired by stories in the Institute’s archive and by the story of the Institute itself.

"By preserving the past, the USC Shoah Foundation Institute is changing the future. These testimonials remind us that although we may be separated by the boundaries of nations or differences of opinion, we all have a shared humanity,” USC President C. L. Max Nikias said.

“We are very fortunate that people like Jeffrey Katzenberg have the compassion and the generosity to help us share these powerful testimonies with more and more people around the world. And we are also fortunate that a visionary like USC Trustee Steven Spielberg had the insight and the foresight to create the Shoah Foundation,” Nikias continued.

Smith believes the Institute’s archive is a voice that speaks to us, one voice at a time. He acknowledged a few Holocaust survivors attending the event and thanked them for their courage and sharing of their stories.

Singer and Oscar-winner Jennifer Hudson provided the evening’s entertainment singing “When You Believe” and “Circle of Life.” Comedian Craig Ferguson, who hosted the gala, said that when asked to take part in the event that he could not say "no" to a free dinner or to Spielberg.

“Our broad and diverse community of students and scholars is dedicated to honoring the hopes and aspirations of every single person who shared his or her testimony,” said Howard Gillman, dean of the College of Letters, Arts & Sciences. “We are all deeply grateful to the countless individuals including Steven Spielberg and Jeffrey Katzenberg and organizations that have come together to support this invaluable education resource.”

The mission of the Institute, housed in USC College of Letters, Arts & Sciences, is to overcome prejudice, intolerance, and bigotry — and the suffering they cause — through the educational use of the Institute’s visual history testimonies. The Institute holds an archive of nearly 52,000 testimonies of Holocaust survivors and other witnesses from 56 countries and in 32 different languages.

Previous recipients of the Ambassador for Humanity Award include philanthropist Wallis Annenberg and actor Kirk Douglas.