Not Your Mama's Film Industry 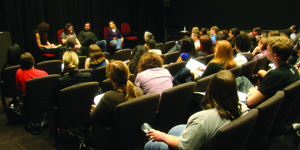 October 9 marked a celebration of the myriad contributions of women to the entertainment industry and a look toward the future, with the Women of Cinematic Arts’ 2010 Industry Forum, entitled Not Your Mama’s Film Industry: 21st Century Entertainment.

Keynote speaker Linda Woolverton, writer of Beauty and the Beast, Mulan and The Lion King, spoke about the importance of portraying female characters as more than victims and standing up to the power structures in the industry that are resistant to change. Woolverton’s latest film Alice in Wonderland has grossed over one billion dollars worldwide.

“It was a stellar event, with many top women in the industry as panelists, from Amy Hennig, Creative Director of the games company, Naughty Dog, to Valarie Phillips, head of Motion Picture Literary at Paradigm, to Madeline DiNonno, Executive Director of See Jane and The Geena Davis Institute on Gender in Media,” said Joanna Cherensky ’06, WCA Industry Forum co-chair, via email. “It really was a unique opportunity for USC School of Cinematic Arts students and alums to hear from top women in the industry and learn from them how to navigate and nurture their own entertainment careers.”