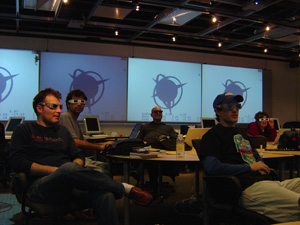 The Microsoft Next Generation Entertainment Initiative will comprise an endowed faculty member, the Microsoft Endowed Professorship, and financial support for the Game Innovation Lab and Interactive Entertainment program. The IMD was recently named by the Princeton Review as the #1 undergraduate game design program in North America.

“With this very generous gift, Microsoft shines the spotlight on the future of gaming. I hope this Initiative further helps to focus leaders in all disciplines of the entertainment industry on the substance and consequence of interactive media education,” said Daley. “As film and television did before it, interactive media is evolving into an art form that will only become richer and more exciting. With such wonderful supporters as Microsoft, we will continue to play an essential role in that continuing evolution, as we have since teaching our first film class here in 1929.”

“We are delighted to be working with the USC Interactive Media Division in a partnership that we believe will help develop and grow the new talent in our industry,” said Spencer. “By working closely with an industry leading program, Microsoft hopes to play a central role in defining the current and next generation of interactive entertainment.”

Expected to begin in summer 2011, the Microsoft Endowed Professorship will serve as a permanent and essential resource for the University. “This is a tremendous opportunity to support our program’s growth into innovative areas of experience design such as gestural play, pervasive experiences, and transmedia storytelling,” said Tracy Fullerton, SCA professor and IMD acting chair. “We will be seeking an active industry leader with a depth of experience in the emerging discipline of games user research, looking to take on the challenge of working within the University setting.”

The new partnership supports IMD’s efforts to push the boundaries in interactive entertainment, and provides Microsoft with access and mentorship to emergent ideas and innovations that students and faculty develop in a creative environment free of immediate commercial pressure.

Located within USC’s School of Cinematic Arts, the IMD began as a set of classes in 1999, and was formally established in 2002. Initial funding from Electronic Arts allowed for the creation of an endowed chair in game design and the establishment of the Game Innovation Lab, now a state-of-the-art research space and think tank where new concepts in game design, play and usability are developed, prototyped, and play-tested. IMD is the only program of its kind tied to a cinematic arts school and, as such, offers unprecedented opportunities for students to explore media convergence in an environment that leverages the natural advantages of its Hollywood setting.

IMD has fostered a multitude of successful game design projects and research initiatives. Recent graduates, including Jenova Chen and Kellee Santiago of thatgamecompany, and Paul Bellezza and Matt Korba of The Odd Gentlemen, are already thriving at the foremost companies in the gaming industry and at their own start-ups.