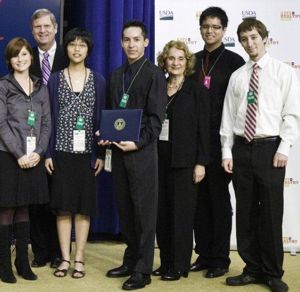 Trainer, a game developed by a team of USC students, has won the Grand Prize as well as the GE Healthymagination Student Award, and a total of $20,000 at the Apps for Healthy Kids Challenge, part of First Lady Michelle Obama’s Let’s Move! campaign.

The game, developed by an interdivisional team of students, including SCA Interactive Media Division students David Villatoro, Erin Reynolds, John Banayan and Erik Nichols, as well as USC students Tony Tseung, Rita Yeung, Ross Danielson, Adam Berkett and Joseph Kohn, takes users to an enchanted island where they care for creatures who have dietary and fitness needs. It uses a webcam interface to monitor the motions of the player and transfers those motions to the on-screen character.

The USC game was built jointly by the SCA Interactive Media Division and the GamePipe Laboratory in the USC Viterbi School. Michael Zyda was the principal investigator with co-PIs Marientina Gotsis of the School of Cinematic Arts and Maryalice Jordan-Marsh of the School of Social Work.

The competition was designed to inspire software developers, game designers, and students from around the country to create engaging apps that will motivate children to choose healthier food options and become more physically active. In four months, students, hobbyists, developers, and corporations submitted 95 eligible games and apps. More than 40,000 people signed on as supporters of the challenge through the website.

To play the game online, go to http://www.davidvillatoro.com/games/trainer/index.php