Robert F. Boyle ‘33, acclaimed production designer, with credits including North By Northwest, In Cold Blood, and The Birds, died in Los Angeles on Sunday. He was 100.

Bob was one of the true greats of the movie world, and an absolute master of his art and craft.
- Dean Elizabeth M. Daley

“Bob was one of the true greats of the movie world, and an absolute master of his art and craft,” said Dean Elizabeth M. Daley. “He played a crucial role in bringing some of the most iconic images in cinema to life, and his work will continue to serve as an inspiration and catalyst for generations of students of the moving image.” 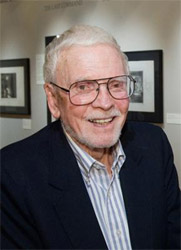 Boyle, who graduated from USC with a degree in architecture, worked as art director or production designer on more than 80 films, collaborating with directors including Cecil B. DeMille, Norman Jewison, Fritz Lang, and Douglas Sirk. He is best known for his work with Alfred Hitchcock, which included the gripping chase across the faces of Mount Rushmore and the crop-duster sequence in North by Northwest, the harrowing seagull attack in The Birds, and the final struggle on the Statue of Liberty in Saboteur.

He received Academy Award nominations for his work on North by Northwest, Fiddler on the Roof, Gaily, Gaily and The Shootist, John Wayne’s final film. In 2008, he was recognized by the Academy with an honorary Oscar for his career as an art director.

After working with Hitchcock on Shadow of a Doubt, Boyle served in the Army Signal Corps in France and Germany as a combat photographer during World War II. Following the war, he returned and married Bess Taffel, a writer for RKO who was blacklisted from the industry after refusing to name names to the House of Un-American Affairs Committee. She passed away in 2000.

Boyle is survived by two daughters, Emily Boyle, of Los Angeles, and Susan Licon, of Toledo, Oregon, as well as three grandchildren. A memorial service is pending.