“Quietly observant and tremendously moving...the film displays an empathy and quiet attention to detail that's all too rare for a filmmaker still in his 20s.”
- Christopher Kelly, THE DALLAS MORNING NEWS 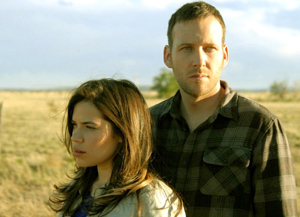 The Dry Land is a moving, taut story of redemption and reconstruction. Starring Ryan Onan, America Ferrera, Melissa Leo, Jason Ritter and Wilmer Valderrama the film brings us into the process a soldier returning from Iraq goes through to reintegrate back into their own life.

The film brought together several USC alums including Writer/Director Ryan Piers Williams, Cinematographer Gavin Kelly and Co-Producer Jason Berman.  We spoke to Piers Williams via email about the film, the challenge of getting it made and how SCA has influenced him.

The film is about the struggles of a soldier returning from Iraq, where did the idea come from?
Five years ago I read an article about a soldier who had recently come home from a tour in Iraq.  He had served his country honorably, and returned home only to struggle with PTSD.  Within a matter of weeks his life fell apart. This was the first time I had ever heard of PTSD.  You have to think back to five years ago when no one in the mainstream media was talking about the struggles of soldiers when they return home.  The news was basically on lock down on anything that was critical of the war.  I was deeply effected by this soldier’s struggle.  Reading the article set off a two-year journey for me in investigating what it was like for soldiers returning home from war. Being the same age as many of the men and women serving our country, I thought it could have very well been me in their shoes.  I wanted to be socially aware of what they were coming home to.  Over the course of two years I absorbed as much information as I could about soldiers’ experiences returning home by reading, watching documentaries and speaking to soldiers and families about their own experiences.  I found there are many soldiers having a difficult time transitioning back to home life.  At a certain point I decided that I had a story to tell and I set out to write it.

Work your ass off, don’t give up, and seek out ways to challenge yourself. But most importantly, enjoy the process.

Talk about the process of getting the film off the ground? What were some of the challenges of this particular production?
The first challenge was the story.  My biggest priority in writing the script was to create the most authentic portrayal as possible.  I’m not a veteran myself, so this required me to be very diligent in my research of the character and the world he lives in.  Every step in the writing process, I engaged soldiers and family members who had been through similar experiences as portrayed in the film.  I would send them the script, hear their thoughts, and incorporate their notes into my story.  Towards the end of the writing process we were able to get the support of the US Army and the Department of Defense.  Their support helped us with the process immensely, both in the development and production stages.

Finding the funding for the film was difficult as well.  It was one of those cases where we struggled for a year to find the funds and then basically overnight we received financing.  I was lucky that my Producer, Heather Rae, was sent the script and immediately responded to it.  After a year of knocking on doors Heather was able to find the financing within two and a half weeks of coming onto the project.  She took the film to Maya Entertainment and they immediately came on board with the financing.  It was insanely quick, but was quite a process getting to that point.

What inspired you to become a writer/director? Was there anything from your time at SCA that helped shape that decision?
I’ve wanted to be a director since I was 13.  When I was in middle and high school I was in theater and video production classes.  Everyday I would write, shoot and edit news stories for our school as well as act in plays.  I had a great love for journalism and for storytelling.  Instead of choosing one over the other I decide that filmmaking would be the best of both worlds.  I had always wanted to go to USC.  I was actually accepted into the SCA Production Program out of high school.  I wasn’t able to make it work, so I studied film at UT Austin for 2 ½ years.  During my Junior year I decided to transfer to USC.  The funny thing is it took me 3 more attempts before the SCA accepted me back into the Production Program.  That was a good lesson in persistence.  Going into SCA I had already known I wanted to direct, so it was more about how SCA helped shape me.  The great thing about the SCA Production Program is that it allows you to push yourself as far as you want.  The Production Program allowed me to develop and explore my filmmaking and storytelling abilities.   I loved my screenwriting courses.  I hadn’t considered myself a writer before coming to SCA, but I came to really love writing while I was there.

What are some of the films and filmmakers that you find yourself looking to for inspiration?
Apocalypse Now and The Deer Hunter are both films I continue to look to for inspiration.  In terms of directors I’m a big fan of Francis Ford Coppola as well as PT Anderson.

Do you have any advice for current USC students?
Work your ass off, don’t give up, and seek out ways to challenge yourself.   But most importantly, enjoy the process.

Were there any particularly important classes or professors you had at SCA?
I loved my film history classes.  When I came into film school I hadn’t seen many classic films.  I was pretty pathetic actually.  I loved studying film history.  I always found that it was important for me to know where storytelling and filmmaking techniques originated from and how they transformed into the filmmaking styles used today.  I think it’s important to know where styles come from in order to know how to incorporate them into your own work.  I also loved the 290 and 310 experiences.  They were like filmmaker boot camps.  I really enjoyed the intensity and focus both classes required.  It was really awesome being in a group of people all creating and all giving each other feedback.  Both classes really helped lay my foundation.