‘A Passion for Light’ 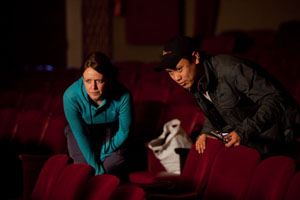 Alice Brooks on the set of The LXD, with director Jon M. Chu

Being a dancing superhero is hard. Filming a dancing superhero? Just as hard, but it’s also a lot of fun, according to Alice Brooks, SCA alumna, and director of photography for the groundbreaking new webseries, The Legion of Extraordinary Dancers (The LXD). Directed and co-produced by ‘SC alum Jon M. Chu, the series blends a comic book-inspired narrative with mind-bending dance moves to tell a story about an epic war between good and evil.

Brooks suffuses every frame of The LXD with a warm, evocative glow that makes each mid-air spin and flip somehow seem both realistic and otherworldly. She spoke with us via email about her trajectory through the industry, and how her first word was a clue to what her career path would be.

Talk about how The LXD came about. I was at the Obama Inauguration the day Jon Chu and (producer) Hieu Ho called me about working on The LXD. We had all worked together on Jon's short, When The Kids Are Away, at USC almost 7 years before. Jon pitched the idea over the phone and by his excitement and energy in talking about the project, I knew it was going to be amazing and I immediately said I would do it. All in all, it was a pretty exciting day!

I have always had a passion for light.
-Alice Brooks

Two weeks later we were shooting the first four episodes. It was like a huge USC reunion. Soon after that Paramount came on board as the distributor and we kept shooting more episodes. Nineteen months later, we just wrapped shooting Season 2. It has been my favorite project for many reasons. First, it is just pure fun. We have worked incredibly hard and fast because we have such a tight shooting schedule. Everyone who works on the project is there because they want to be there and it makes the whole atmosphere unlike any other set I have ever been on. Also, because the whole web series world is new, there are no rules and we get to make up the rules as we go and that opens up pure creativity for every department. Finally, working with some of the best dancers in the world is truly inspiring. Their energy electrifies the room. They always put everything they have into every moment. This is how I strive to live my life and carry out my career as well! 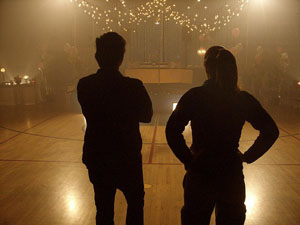 Brooks, right, surveys a set from Episode 1 of The LXD

What inspired you to become a cinematographer? Was that always the plan, or did you come to SCA with different aspirations? I have always had a passion for light. My first word was "moon", as I pointed to a round globe that illuminated a parking lot. Growing up as a child actor, I was more fascinated by what was going on behind the camera. I loved watching the crew light a set from nothing. In high school, I started taking still photography and by the time I got into film school at USC I knew that all I wanted to do was shoot. After graduating, I spent 1 ½ years shooting grad thesis films and really working on developing myself as a cinematographer. I think I shot almost 20 shorts during that period of time, which led to getting an agent and my first ultra-low budget feature. What a thrill it was the first time I got paid to do what I love!

What are some films and filmmakers that you find yourself looking to for inspiration? Growing up my dad and I would watch The Natural on VHS and then Laserdisc. My mom and I would watch The Black Stallion. I still consider those among the most beautiful movies and Caleb Deschanel is definitely my all time favorite cinematographer. I love the magic he brings into every frame.

How did your time at USC prepare you for joining the industry? USC did a great job preparing me for the industry. It was a great place to learn how to work with people towards a common goal. Professors Judy Irola, Earl Rath, and Woody Omens inspired me and allowed their cinematography classes to be a sandbox in which I could try new things and make mistakes. 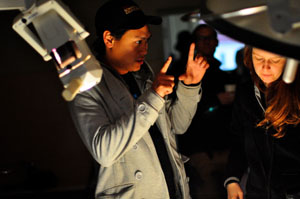 Chu and Brooks on set of The LXD

Professor Jerry Isenberg gave me two useful keys to the industry. First, he said that getting into movie making was like throwing yourself against a brick wall over and over again and then one day you find a hole in the wall and you climb in and suddenly you are in the industry and working. The second insight came after I asked him if he would watch my reel and give me feedback as a producer. He did and after watching, he explained to me that although I considered myself an artist, that Alice Brooks is actually a business, and that I needed to market myself as such. He asked me to keep asking myself how I wanted to represent myself to the world and when I knew that, I would know how to put my reel together. I started doing things that any new business would do, by branding my logo, doing mass mailings of my reel, and creating a website that I am in control of so I can update it and add things to it quickly and easily. As technology and the industry change, I am always reminded of those words from Jerry and am forever grateful to him.

What are you currently working on, or what’s the next thing you’re going to be working on? Next up, I am shooting Season 3 of The LXD and prepping to shoot a 3D horror film, The Need, and a family drama, New England, which is being directed by Domenica Cameron-Scorsese. I also have started shooting more commercials, which I really love too.

Do you have any advice for current SCA students? If I had to do it all over again, I would not have taken myself so seriously. When I turned 30, I realized that! School should be fun and a place to experiment and play and make mistakes and take huge risks. The bigger the risks you take while you are in school the more you will learn about yourself. Creativity should not be inhibited, so don't inhibit yourself!