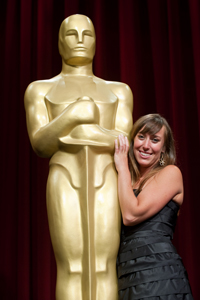 All of the nominated student filmmakers were brought to Los Angeles for a week of industry-related activities and events that culminated in the awards ceremony. Henricks spoke warmly of the pre-ceremony events:

“The highlights of the four days we spent together were meeting with members of the Writers Guild of America, American Society of Cinematographers, Directors Guild of America, and the board of Governors of the Academy of Motion Picture Arts and Sciences,” said Henricks. “Getting to speak with all of these leaders in their respective fields in the industry in such an intimate setting was so inspiring and encouraging.”

“The ceremony was very glamorous!” said Henricks. “I was able to give a speech and actually say the words ‘I'd like to thank the Academy’, which is really fun to say. They made the entire experience special for all of us.”

Henricks also cited the importance of her time as an SCA student. “I'm really happy and lucky to be a part of the DADA program. Not only has it provided me with a valuable learning experience, but it also has provided me the opportunity to travel to film events worldwide like the Cannes Film Festival and Tokyo Anime Fair,” said Henricks. “The faculty and staff go above and beyond to help me and encourage me, whether it's meeting with me one on one outside of class or showing their support at the award ceremony.”

Other SCA alums who have won Student Academy Awards include Robert Zemeckis ‘73 and Gregg Helvey ‘09, who was nominated at the 2009 Academy Awards for his short film Kavi.