The Red Sea Institute of Cinematic Arts (RSICA) celebrated the graduation of its inaugural Masters of Fine Arts class in a ceremony held at the Movenpick Tala Bay Resort in Aqaba, Jordan, on May 21, 2010. In attendance were His Royal Highness Prince Faisal, the Board of Directors of RSICA, Dean Elizabeth M. Daley, members of the Jordan Cabinet and Parliament, academic peers and friends and family of the graduates. 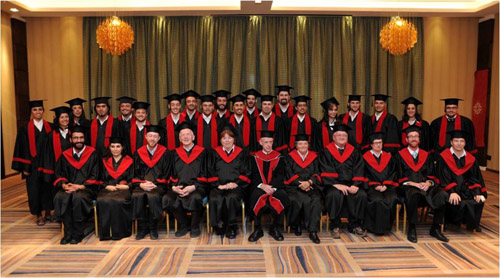 The Institute, which opened in September 2008, is a joint venture between the Royal Film Commission of Jordan, and the USC School of Cinematic Arts. 21 graduates went through the two-year MFA program, which teaches a broad variety of classes in screenwriting, directing, producing, editing, cinematography and sound.

Samer Mouasher, Vice Chair of RSICA and Commissioner of the Royal Film Commission Jordan, took the opportunity to point out the burgeoning Jordanian film industry, and the graduates’ potential to shape it.

“The Hurt Locker, shot in Jordan, won 6 Oscars earlier this year, the most of any film in 2010,” said Mouasher. “Two of the films nominated for the Palme D’Or at this year’s Cannes Film Festival were shot in Jordan. You can call me biased, but I call this success. Thanks to RSICA, you students now have the power to create change; and let’s face it, it’s all about change.”

“You are responsible to your audiences; give them the truth with as much craft and art as you can find in yourselves,” said Dr. James Hindman, RSICA Dean. “Respect them, respect the region as you present it to the world. Speak truly from your heart. You came full of passion, excitement, full of feelings, ideas and energy. Now you have skills. So look out world, here comes the RSICA Class of 2010!”