Sociologists, career advice experts and speed daters agree: you only have one chance to make a first impression. Fortunately, SCA students are making exceptional first impressions through an eclectic array of projects put on display as part of the School’s end-of-year programs.

The First Look film screening series, which took place at the Directors’ Guild of America Theatre, screened 37 student films, including Kavi, a 2010 Oscar nominee for Best Live Action Short Film and Our Neck of the Woods, a 2009 Sundance Film Festival entry.

“First Look is a great experience because, as film students, we learn that filmmaking is a team effort, and we’re all in this together,” said Kavi director Gregg Helvey. “It’s a special time to be able to share our work with one another, but also to launch into the real world.”

“Your First Look films are your calling cards,” said Michael Taylor, chair of film and television production, addressing the audience's student filmmakers. “They will open doors for you as they have for many alumni who are working in the industry today. So this is the First Look, but it’s also just the beginning.”

Now in its ninth year, First Pitch, put on by the Writing Division, returned to the Four Seasons Hotel in Beverly Hills for another fast-paced round of intense pitching to reps from leading agencies, management firms and production companies. The event, sponsored by Albert Friedman and the Samuel Friedman Foundation, was hosted by SCA alum Josh Goldsmith (King of Queens, Til Death). Companies who participated included UTA, Film Engine, Paradigm, the Gersh Agency, and the Walt Becker Company.

Writing chair Jack Epps, Jr. spoke warmly about the event, and its impact on the attendees.

“Students learn management skills, interact with industry in terms of getting people to come in, and they get a sense of who they are and of the nature of the business,” said Epps. “First Pitch was created by students, and it’s run by students, and I’m very proud of that. They found a need for it, created it, and continue to run it. It’s a tradition.”

“It was more fun than it seemed like it would be,” said third-year M.F.A. candidate Ryan Gilmour. “The nerves melted away right away and it was nice to put a face to all of the names that we hear and read about in the trades. We always hear that by going to USC, getting exposure to managers, agents, and production companies isn't going to be a problem, and it was nice to see the reality of that promise.” 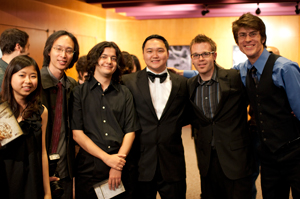 The Division of Animation and Digital Arts’ (DADA) First Frame consisted of an eclectic array of projected, immersive and sculptural installations, exhibited in the SCA Gallery, and a screening of films, also held at the DGA Theatre.

“The First Frame program was a huge success,” said DADA chair Sheila Sofian. “The films included a wide variety of techniques and genres, including a stereoscopic animation. [It was a] wonderful outreach for the program.”

Projects ranged from SomeDay, by Lulu Cao, a Flash game that examines different modes of thinking between childhood and adulthood, using new twists on traditional puzzle games to SolidSpace, by Bryan Jaycox, a haptic feedback device that allows the user to touch and feel an object at a distance, using ultrasonic rangefinders that map contours to the user’s fingers.

“Having friends, family, and industry folks all in one theater like that made me realize that we were putting our best foot forward right at the start,” said IMD instructor Peter Brinson, who curated this year’s First Look Interactive program. “But like a good game prototype, not only was it fun, but it gave us all kinds of ideas about how we want to do it next time."

“Interactive work is often a very individual experience, with each person choosing her own path through the content, and it can also be a lengthy experience, with even some student projects taking hours to complete,” said IMD instructor Jeremy Gibson. “The First Look venue allowed many guests to come to one place and see a brief overview of many of this year's best pieces in a way that hopefully encouraged them to approach students afterward and learn more about their projects.”