Indie Filmmakers Ask If True Love Comes With a Guarantee

What if a clock could count down to the moment you meet your soul mate? The new film, TiMER, by writer/director Jacqueline Schaeffer ‘04 and producer Rikki Jarrett ’06, examines this question and finds that the answer, as with most matters of the heart, is far from simple. 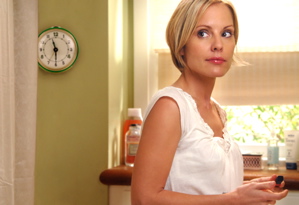 The film posits an alternate version of modern-day Los Angeles, where a device can be implanted in the wrist that will accurately display the exact number of days, hours, minutes and seconds until the wearer meets their true love. Unfortunately, the film’s protagonist, played by Emma Caulfield, has a timer implanted, only to find that it’s blank.

Schaeffer and Jarrett, who met at SCA, spoke with us via email about the genesis of the film, as well as the challenges of an independent production. Love may be tough, but at least you don’t have to get location permits.

The film has a somewhat sci-fi-based premise: where did the idea come from?
JS: My brother was getting married and my mother had a "Countdown to the Big Day" clock. You program in the date of the wedding and it tells you how many days you have left to get the flowers, etc. It's supposed to be a helpful tool for planning a wedding but it just made me feel old and single. So I started thinking how convenient it would be to have one of those devices for my love life. I didn't need my soul mate to show up and be my date for the wedding but I wanted to know that he was at least on his way. I thought that a guarantee like that would make me a less cranky bridesmaid. But once I started writing the script, I realized it would be terrible knowledge to have.

Talk about the process of getting the film off the ground.
RJ: Jac brought me an outline of the script about a year after we had graduated from USC. We were both itching to make a movie independently, and when I read the outline, my mind was completely blown. I thought it was the coolest concept I'd ever heard. So we developed the script together for about a year, and when it was ready, we raised financing through private equity investors.

Once we went into production, locations were by far the biggest challenge. We shot the movie in 24 days completely on location in Los Angeles. Not an easy thing to do on a budget as low as ours. On the first day of shooting, there was some mix-up with the dates for our permit, and the cops showed up threatening to arrest us. Jac kept shooting while we were having this conversation with the cops, so we got everything we needed, but we did have to shut down early that day. Not the best thing to have happen on day one! 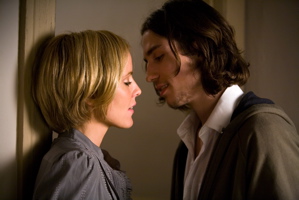 What inspired you to take the creative path you’ve chosen?
JS: I was fourteen when I decided I wanted to direct. Prior to that I had been heavy into acting, which I continued, but it turned out to be way more fun if I got to tell everyone what to do. I loved theater but I realized that with a movie, you're giving the audience exactly what you want them to see. I guess it all comes down to being a total control freak, not to mention a rabid cinephile. My dad showed me his favorites films from the '40s and '50s when I was way too young for them and my love affair grew. By the time I got to USC, I had no doubt directing was my path but it was in school that I realized I could also write. Writing my own shorts turned into writing a feature that I was lucky enough to have the chance to make.
RJ: I didn't even know what producers did until I got to USC, and I sort of fell into producing inadvertently. I wanted to take 546, but I didn't feel qualified for any of the other crew positions, so I decided to produce. I ended up working with Jac on her thesis film, Black Box. I had a great time making that short, and I discovered that I had a knack for producing. Once that film was finished, other people started approaching me to produce their thesis films, so by the time I graduated I had produced 5 of them. Working with so many different filmmakers in various genres, each with their own distinct styles, and sometimes in out-of-state locations was really exciting, and a valuable learning experience for me.

What are some of the films and filmmakers that you look to for inspiration?
JS: On a small scale, I'm always very inspired by films like Once and Before Sunset/Sunrise. Few actors, all location shooting, earnest performances in stories that take place over a short period of time. They just drip with authenticity and romance and they make you want to grab your friends, pick up a camera and go. On a more technically ambitious level, I am so impressed by challenging sci-fi films like Children of Men and smart action films like The Hurt Locker. A substantial budget and a complicated shoot are dazzling temptations, but only if the story and characters are solid, as in those pictures.
RJ: I'm inspired by a lot of female producers, particularly Kathleen Kennedy, Laura Ziskin, and Stephanie Allain. 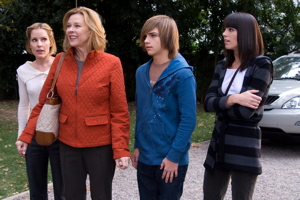 Do you have any advice for current USC students?
JS: Write your voice! Write the way you really speak! Write what's in your gut!
RJ: Do as many internships as you can. It can really help you crystallize what discipline you want to focus on, or at least rule out areas that you discover you don't like. I realized that I have no future as an editor when I had an internship that bored me to tears. But I also had a paying job when I graduated, because the production company where I interned hired me.

Were there any particularly important classes or professors you had at SCA?
JS: Rowdy Herrington taught me that -- literally or figuratively -- when you introduce a gun into a scene, there is always a point at which someone needs to cock it. Storytelling is all about raising the stakes.
RJ: Michael Taylor taught a Creative Producing class that really opened my eyes to the fact that there's so much more to producing than budgets and contracts. It inspired me to be involved in all level of creative decisions, from development through to distribution. In the filmmaking process, there are so many ways in which the director's vision can become compromised, and I learned that part of being a great creative producer is protecting that vision at all costs. If you don't have that, you're not going to have a good movie. Brenda Goodman was also a big influence during my time at USC. She always had great advice, and I still call her when I'm in need of guidance.

What’s your next project?
JS: I'm writing another romantic comedy at the moment and I'm up for a few directing jobs. We'll see what lands first!
RJ: I'm switching gears a little. I'm writing a coming-of-age drama that I plan to direct. It's something that I started when I was in school and then abandoned. I dusted it off, and I'm really enjoying this new challenge.