SCA Students Amp up the Indie Factor at First Look 2010

USC School of Cinematic Arts (SCA) students amped up the indie factor at this year’s First Look festival with entries including an animated foreign-language documentary and an official 2009 Sundance selection.

The festival helped launch the careers of such filmmaker alumni as Jason Reitman (Up in the Air), Shawn Levy (Date Night) and Jeffrey Blitz (Spellbound).

The weeklong event, which comprised screenings of 37 student films as well as several panels, culminated with a gathering of students, friends, family, faculty, alumni and industry professionals at the Directors Guild of America.

After an introduction by Associate Dean of Student Industry Relations Larry Auerbach, Dean Elizabeth M. Daley welcomed the audience and congratulated the students.

“I thank you for making USC Cinematic Arts a really amazing place, and I just hope you enjoy it as much as I do, that the word ‘enjoy’ stays in your life and that you’ll always find what you do to be fun and wonderful and engaging,” she said. “I’m very proud of all of you.” 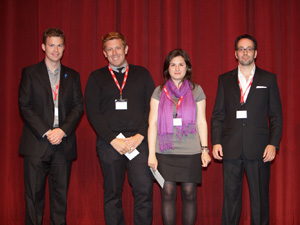 The First Look festival has a long tradition of doing SCA proud. Held annually, the festival helped launch the careers of such filmmaker alumni as Jason Reitman (Up in the Air), Shawn Levy (Date Night) and Jeffrey Blitz (Spellbound).

“Your First Look films are your calling cards,” said Michael Taylor, chair of film and television production, addressing the audience's student filmmakers. “They will open doors for you as they have for many alumni who are working in the industry today. So this is the First Look, but it’s also just the beginning.”

Taylor then announced the winners of faculty-selected awards for outstanding achievement in cinematography, directing, screenwriting, producing, sound, editing and documentary.

The audience viewed the festival’s six top-rated films, as selected by a jury of industry professionals that included three SCA faculty. Of these six, three were honored with $2,000 gold, $1,500 silver and $1,000 bronze awards from sponsor FotoKem. 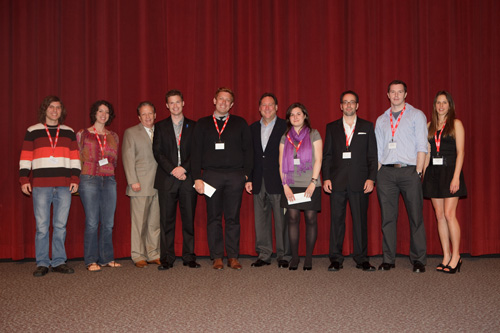 Top prize went to Kavi, a tale of modern-day slavery in India written, directed and produced by Gregg Helvey. A 2010 Oscar nominee for best live action short film and 2009 Student Academy Award winner, the film has already played at several festivals and is set to screen at the 2010 Cannes Film Festival.

The silver award went to writer-director Kyle Burns' drama Adam, which tells the story of a suburban boy attempting to moonlight as a gay hustler. Director Daniela Sherer’s animated documentary Overnight Stay, about an 83-year-old Jewish woman’s memory of a kindness bestowed upon her in the midst of the Holocaust, won the bronze.

“The top three films this year are very indie, very international in terms of their feel,” said Sandrine Cassidy, director of festivals and distribution for SCA. “I love that one’s set in India; one is in German. The other, Adam, is almost European in its feel in terms of the pace. So they’re very diverse.”

In addition to bronze award-winner Overnight Stay, the top six included two other documentaries, an unusually high number. No Kill, directed by Cristina Malavenda, gave voice to the five million cats and dogs that are euthanized in U.S. shelters each year. Jared Scheib and Ashley Karitis co-directed Life’s Waltz, in which senior citizens discuss everything from widowhood to singer Avril Lavigne.

“I was glad to see that there were three docs among the six finalists,” said Scheib. “And I shouldn’t speak for my own, but the other two were very strong.”

Karitis added, “I was happy to see an animated film. Animated documentaries like Overnight Stay are really rare to come by, so it was a really neat way to tell that story.”

The evening’s most offbeat entry was Our Neck of the Woods, which played at the 2009 Sundance Film Festival. In writer-director Rob Connolly’s film, based on a short story by Joe Meno, a foreman becomes enamored of a Georgian refugee, who disrupts life at a factory that produces flammable lawn-ornament deer. 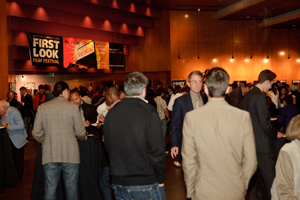 The First Look 2010 reception was held at the DGA

In sharp contrast to the indie-flavored dramas that dominated the top six jury-selected spots, this year’s audience award winner was director Lior Chefetz’s action-comedy The Godmother, which depicted a marital misunderstanding turned mob-hit-gone-wrong. The award, voted upon by attendees at the screenings of all 37 First Look films, also carried a $1,000 prize.

However diverse the filmmakers' artistic sensibilities, they agreed that First Look was a thrilling opportunity to screen their work at the DGA, meet industry professionals and deepen the bonds of the Trojan Family.

“First Look is a great experience because, as film students, we learn that filmmaking is a team effort, and we’re all in this together,” said gold award winner Helvey. “It’s a special time to be able to share our work with one another, but also to launch into the real world.”