USC alumnus, filmmaker and benefactor George Lucas ’66 was awarded the USC Presidential Medallion, the university's highest honor, by President Steven B. Sample on April 26 at the annual Academic Honors Convocation. 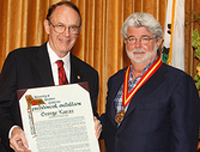 “We at USC are so proud to count George Lucas as a member of our Trojan Family," Sample said. "He has distinguished himself as a creative genius, a prescient supporter of multimedia literacy and a devoted alumnus. Not only has he inspired and delighted audiences worldwide with his imagination, but he is generous in ensuring that new generations of artists and innovators can illuminate the human condition and give wings to their greatest dreams.”

Added School of Cinematic Arts Dean Elizabeth M. Daley: "Since his graduation, George Lucas has remained an unwavering supporter of the school and its goals. Today, as chairman of both Lucasfilm Ltd. and the nonprofit George Lucas Educational Foundation, as well as a member of the school’s Board of Councilors, he continues to explore - and to share - his passion for cinematic arts and for learning."

Lucas has been in the vanguard of promoting fluency in sound and visual imagery in addition to the written word. He has been instrumental in creating and guiding USC’s Institute for Multimedia Literacy, the mission of which is to advance educational programs and conduct research on the changing nature of literacy in a networked culture.

The Lucasfilm Foundation’s $175 million gift in 2006 to the School of Cinematic Arts strengthened the school’s endowment and supported the construction of a cinematic arts complex. Using the latest resources and tools, new generations of artists are mastering the techniques of film, television, animation, writing and interactive media at the school, and top researchers are developing innovations that are pushing out the frontiers of communication, entertainment and education.

The following awards also were conferred at the convocation: