Over the past year, SCA’s First Team program has had success bringing together alumni writers, directors and producers in its inaugural run. The projects these Trojan filmmakers have packaged with the help of SCA resources are already finding their way throughout Hollywood with several more on the horizon. Setting out this month under the First Team banner is Kelly & Cal, an offbeat dramedy about an unlikely friendship between a new mother struggling with her identity and a 17-year old in a wheelchair who’s been spying on her. 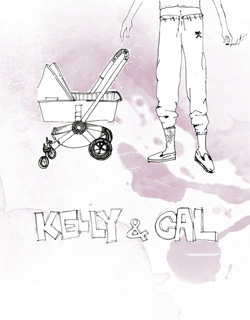 “We love this project because it is a heartfelt independent comedy that highlights a friendship between characters who are not frequently portrayed on the big screen,” said Nadia Munla ’09, the film’s producer.

Munla, a graduate of the Stark program, was not the first person to take notice of the unique Kelly & Cal. When writer Amy Lowe Starbin ’98 brought her screenplay to First Team’s opening seminar and mixer, there was a flurry of interest. Among those who instantly fell for the story was fellow production alum Jen McGowan ’05. McGowan, whose USC-produced short, Confessions of a Late Bloomer, earned showings at the Tribeca Film Festival, Cannes Short Film Corner and other high-profile venues, would ultimately bring Starbin and Munla together as the trio came to realize their shared vision through Kelly & Cal.

Kelly & Cal explores a friendship between Cal, a teenager whose recent accident landed him in a wheelchair, and Kelly, an ex-punk rocker struggling with her role as a new mom. The two are drawn to each other by a sense of rebellion against suburban life and end up forming a magnetic but fragile bond that will challenge them to embrace their new realities.

Through the help of various First Team seminars and months of hard work, Munla, Starbin and McGowan have refined Kelly & Cal to the point that it’s finally ready to enter the industry. This week, the project was sent out to First Team-affiliated industry reps, who will get an exclusive first look at the potential feature and potentially set the wheels in motion of bringing the latest SCA story onto the silver screen.