A Conversation with The Odd Gentlemen

On February 18, USC School of Cinematic Arts celebrated the launch of The Misadventures of P.B. Winterbottom. The brainchild of two recent SCA graduates Matt Korba ’08 and Paul Bellezza ’08, Winterbottom originated as Korba’s thesis project – and with an assist from Bellezza, it is one of several games born at SCA to find success in the gaming industry in the last few years. 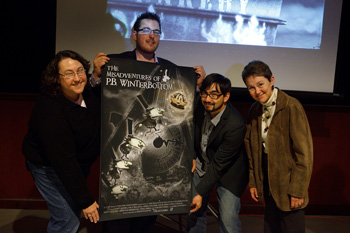 “I actually met my agent at a USC presentation,” said Korba. “Because of the USC connection and networking, we were able to get professional people to help us out. Right now, we’re enjoying the release, working on our next property and we want to grow naturally from here.”

Korba and Bellezza formed the design company The Odd Gentlemen, which has been heralded by sources such as USA Today and Gamepro as a pioneer success story of SCA’s Interactive Media Division.

“We got into the Independent Games Festival in 2008, and got a lot of interest,” said Bellezza. “We applied to another festival based in L.A. called IndieCade and they had a presence at E3 that year. Every major game company brings their games that are going to be coming out that year to the E3 Expo. At E3, we presented our game next to companies like EA and Ubisoft and got a lot of attention.”

Winterbottom’s success at various gaming conferences in 2008 ultimately landed Korba and Bellezza a chance to launch the game via developer 2K Play. At this point, Korba and Bellezza were still modeling a Flash-run rough draft of Winterbottom, but now the opportunity had come along to take their project to the next level. Over the next thirteen months, Korba, Bellezza and the rest of the Odd Gentlemen would set about the intensive process of producing a commercial video game.

“Similar to film production, there’s different stages,” said Korba. “There’s concept, pre-production, production. The very first thing we had to do was build our tools. Our engineers built us an engine from scratch and then they built a design suite where someone like me, who knows a little bit of code, could go in and place things in the level and tell the character to spin around or activate when I touch you. That’s the first four months.”

The game centers around its titular character, a top hat wearing, mustachioed pie lover whose giant nose gets him in trouble when he chases the elusive and alluring Chronoberry Pie through a rift in the time space continuum. Now unstuck in time, Winterbottom must solve a series of puzzles set in past, present and future (seventy-five in all) to claim the pie of his affections, all set against a quirky, black and white, silent film world.

One unique element in Winterbottom is called recursive replay, or the ability to perform the same action more than once with escalating consequences. Not only do Winterbottom’s actions in the story of the game cause problems he must later undo, but he can also record clones of himself who by repeating Winterbottom’s past actions can either hurt or hinder our hero’s progress.

The game has already won numerous awards for its innovation and design both on the independent circuit and from mainstream tastemakers like the E3 Expo, where Winterbottom shared Best of the Year (2008) honors with multimillion-dollar franchise offerings from top game corporations. Xbox 360 owners can purchase it now on Xbox Live and see for themselves or visit the game’s website to find out more. As of April 20, the game will also be available on Windows PC through Steam (http://store.steampowered.com).

The Odd Gentlemen’s next project is under wraps, but Korba and Bellezza did offer one simple piece of advice to any SCA gamers moving forward with their own aspirations in the booming, and sometimes-grueling world of video game design.

“It’s a game, have fun with it,” said Korba. “We’re doing what every thirteen-year old dreams about.”