The Power of Yes

A standing room only crowd packed the Ray Stark Family Theatre for an evening with Academy Award-winning filmmaker and SCA alumnus Ron Howard on . The acclaimed director/producer spoke for over two hours, relating anecdotes from his lengthy career and emphasizing the importance of creative collaboration. 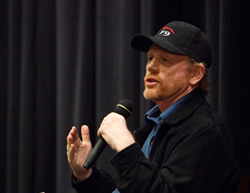 When asked about his experience working with actors, Howard mentioned Skyward, a television movie he directed in his twenties, that starred Bette Davis, who was not initially excited about working with a director of Howard’s youth and inexperience.

“I called Bette before we started shooting, introduced myself, and she kept calling me ‘Mr. Howard.’ Finally, I said, ‘You can call me Ron’ and she says, ’I will call you Mr. Howard until I decide whether or not I like you,’ and then she hung up the phone.”

Concerned, Howard called his father, actor Rance Howard, for advice. “He told me that actors don’t want to feel alone out there.” By simply directing Davis and giving her the feedback she needed, it wasn’t long before the venerable actress was calling Howard, “Ron.”

Howard repeatedly stressed the power of letting go and being open. He pointed out his own examples that taught him to listen to other opinions and let go of that tight grip filmmakers keep on the project “between your ears.”

“Don’t ever underestimate the power of ‘Yes,’” Howard said. “The better you become at saying ‘Yes,’ the easier it becomes when you have to say ‘No.’”