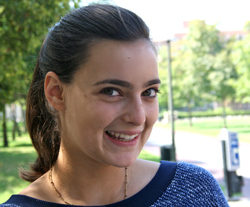 “It gave me confidence as a filmmaker,” says Janey.  She originally followed her brother to the USC SCA Summer Program as both were interested in filmmaking.  The previous year, they attended the New York Film Academy.  “I originally came to it through acting,” she continues, having taken an acting for the screen course at the NYFA.  At the SCA Summer Program, however, Janey elected to take USC/Warner Brothers Producing and Directing class in which students work on multiple projects that allow them to get into the “nitty gritty details of production.”  “You get a taste of equipment rental, dealing with contracts, rules to follow.  Lots of paperwork and permits.  I even had to manage the craft services table,” she continues.

Janey was 16 in her first year of attendance, and as is required of all students under the age of eighteen, she stayed in designated minor student dorms.  It’s a taste of college life, she says, and that it’s especially unique getting to live with other people who share the same goals and interests.  “It’s a new type of friend.  In high school, sometimes you’re friends with people because you’re around them all the time.  Everyone here wants to help each other though, and you all love movies.” 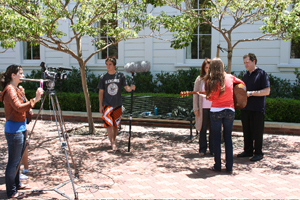 On set of Janey's Production

Between her first and second summers with the program, Janey had a short film play in the Los Angeles Film Festival Future Filmmaker series, and realized that she would prefer to focus on a single project.  For her second summer, she enrolled in the Directing Intensive course, which allows students to focus themselves primarily on the logistics and skills needed to direct something well.  At first, she found the course daunting.  “There were only two minors in the class,” she says.  She quickly realized however that everyone, whether they were sixteen or sixty, is interested in helping others succeed.  “I made some long lasting friendships, international ones too.  The first year, my roommate was from England.”

Ultimately, Janey thinks that the “learning-by-doing” approach of the classes has proved invaluable and that the program is an excellent way for students interested in filmmaking to divine whether or not it’s right for them.  And of course, there are the friends and connections the program makes possible.  “An actress of mine is in the new Miley Cyrus movie.  You never know who you work with could be someone someday.”