Tin Pang, unlike the majority of the USC SCA Summer Program students, is not from the United States.  Tin hails from Australia and came to USC based upon the SCA’s reputation as a film school.  In his first summer at USC, he undertook the USC/Universal Producing and Directing course.  “I had gone to film school in Australia, but was looking for the USC experience,” he says.  “I didn’t expect it to be that intensive.” 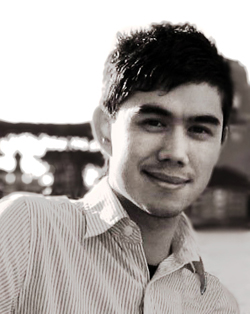 Throughout the six-week course, Tin worked on several projects until completion, adhering to the rigorous production schedule.  “The school is really like a mini-studio.  You have a small budget and have to worry about producing and politics.  It’s a lot of work, really fast and a wake-up call for first time filmmakers.”  Despite the workload, however, Tin found that the school had the resources to help get the work done, and the necessary network of people; both faculty and students, to ensure that everyone who wanted to work could do so.

“It was my first real exposure to the American film industry,” says Tin.  “You tend to glorify it a little bit, but it was helpful getting to see it up close.”  The desire to see more of the industry from a closer perspective led Tin to return the following summer and enroll in the Summer Program’s internship course.  In the course, students are given a packet containing the contact information for various companies, and it’s up to the student to find an internship.  “It’s really what you make of it,” he says.  Every Monday, students return to USC and discuss their weekly experiences with faculty and other students.

Tin interned at Dreamworks in their development department.  “I originally thought I wanted to be in development, but it was a lot of dealing with agencies and fielding calls.  I realized I’d rather be running around being creative on a set than sitting in an office.  At least this way, I was able to make an educated decision about my career path.”

According to Tin, the program bestowed him the confidence to enter the industry, and in turn, the confidence to move to Vancouver where he now works as a production assistant on the television show Smallville.

“I’m confident enough now to know where I need to go.”