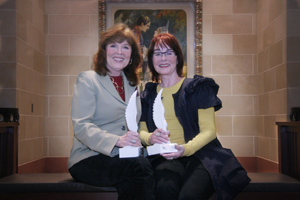 The WIFTS Foundation, an organization devoted to recognizing and promoting innovative women filmmakers, established the International Visionary Awards to honor women from all walks of life. The awards were given at a gala event at the Andaz Hotel in West Hollywood on December 4, 2009. Other awardees included actress Nancy Kwan, actress/activist Shohreh Aghdashloo and costume designer Ruth Carter.

Irola, who was presented with the Cinematography Award by director/writer Jesus Treviño, spoke about her own shifting attitudes toward this kind of recognition.

“For years, when I was younger, I didn’t want to be ghettoized as a woman,” said Irola. “I wanted to be recognized as a cinematographer and for my work. But now that I’m older, and women have truly come so far, we can be recognized by groups like WIFTS for our work, and it’s okay.”

Jeffries received her Screenwriter Award from former colleague and current co-executive producer on Mercy, Toni Graphia, who Jeffries worked with on China Beach.

“An award like this gives one that vote of confidence for the work ahead that still needs to be done,” said Jeffries. “And if we’re encouraging our students to keep their noses to the grindstone, I think we have to be the best example for that, not just in terms of what we’ve surmounted in the past, but also how we’re going to continue to succeed in the future.”

To be in this business, you have to be prepared to run a marathon. The sprinter may have some easy success, but if you want a career and a life as an artist, then it's a marathon.

Both professors spoke about the complexities surrounding the perception of women in the industry.

“The first script I wrote on assignment was about a woman Marine,” said Jeffries. “After my agent sent it out, I remember going to one of my early studio meetings - this was around 1983 - and the executive behind the desk looked shocked when I walked in. ‘I thought it was George Jeffries’. Then he said, ‘You write like a man.’ That was a high compliment at the time. It meant I qualified, at least on the page, as a professional equal.”

“You’re always reminded that you’re a woman,” said Irola. “Look at Nancy Meyers: her films come out, and are great financial successes, but they’re dismissed as ‘just women films.’ When you’re a woman, your work still gets put in that box.”

But Irola singled out the acclaim for Kathryn Bigelow’s film The Hurt Locker, which was recently honored for Outstanding Directorial Achievement in a Feature Film by the Directors’ Guild of America, as a positive step. “I jumped up and down in my kitchen for an hour when I heard that,” said Irola. “I was proud of the DGA for not just acting like a boys’ club, and for giving it to the director who truly deserved the honor.”

Jeffries cited an ongoing study, made by San Diego State University professor Dr. Martha Lauzen, which has tracked women’s representation in creative and executive roles within the film industry. The most recent study, which covered 2008, also included below-the-line positions like production designers, sound editors and production managers. In 2008, women accounted for 16% of all directors, executive producers, producers, writers, cinematographers, and editors working on the top 250 domestic grossing films of the year. Twenty-two percent of the films released in 2008 employed no women in the previously mentioned key creative roles.

But Jeffries was quick to point out that even though there is much room for improvement, these statistics are no cause for despair.

“My sense is that my students are so bright and motivated about both the craft and the business that I don’t think the women or the men see obstacles,” said Jeffries. “They’re aware of the turmoil in the industry, but I think there’s such hope and expectation that I don’t think they think they’re going to be dealing with any prejudice or intolerance.”

Both Irola and Jeffries maintain busy professional careers outside of their teaching duties. Irola is in post-production on her latest documentary, Niger ’66, which traces her own experience as a Peace Corps volunteer, contrasted with the culture shock of re-entering the United States amidst the turmoil of the late 60s. The film also documents a 2008 trip to Niger, made by Irola and four other original Corps members, to reconnect with friends and see how their work had progressed.

Jeffries is currently in the development stages of a dramatic television pilot with a production company, and completing her second novel.

Irola was clear about the importance of continuing a career alongside teaching. “I don’t think that you can be an effective teacher on this level if you’re not still creating,” said Irola. “So what if it’s a struggle? Everything’s a struggle. Do it. It’s much more exciting to be working in your field, and I’m glad that USC allows and encourages it.”

Irola and Jeffries both expressed their pride at being recognized by the Foundation.

“Seeing the other women who were honored, who are still very active, was a real high in the way of support of women in our field,” said Irola. “Both Georgia and I have long careers, we’re both working, and we’re recognized for it. That example is very important to pass onto our students. There’s nothing wrong with history.”

“The award was a tribute to the process of re-invention, which we know a lot about in our business, because of the reality of moving from project to project and medium to medium,” said Jeffries. “To be in this business, you have to be prepared to run a marathon. The sprinter may have some easy success, but if you want a career and a life as an artist, then it’s a marathon. And we have to be those role models for our students, and help them build the resilience to withstand the failures as well as the successes.”