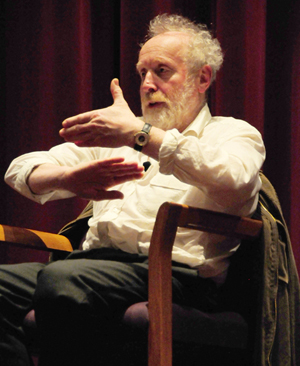 A rainy week in Los Angeles did not dampen the enthusiasm of hundreds of USC students and animation devotees who were treated to a rare visit by world-renowned Russian animator Yuri Norstein.

Norstein, who Spirited Away creator Hayao Miyazaki cites as an influence, is best known for his short films, Tale of Tales and Hedgehog in the Fog. Tale of Tales was recognized by an international jury at the 1984 Los Angeles Olympic Arts Festival as the “Greatest Animated Film of All Time.”

Over his career as an animator, which began in 1962, Norstein developed a special technique for creating the three-dimensional look of his films. A series of glass planes, spaced about a meter apart, on which cut-outs are placed, can be moved closer to or further from the camera, as well as horizontally. The technique allows for a uniquely flexible and realistic range of emotion for the characters.

The animator’s current project is a feature film adaptation of Nikolai Gogol’s short story, The Overcoat. Norstein has been working on the project since 1981 with his wife and collaborator Francheska Yarbusova. The film’s unusually long gestation period has been marked by numerous setbacks, including Norstein’s dismissal from Soyuzmultfilm, the main Soviet animation studio, in 1986, and the death of the film’s original cinematographer, Aleksandr Zhukovskiy in 1999.

If you have a choice of writing poetry and opening a store, you should open a store.

Over the course of his three-day visit to SCA, running from February 3rd to the 5th, Norstein delved into the minutiae of his technique in a series of seminars with animation students, showing clips and stills of his own work. He also showed clips from others’ work that he cited as sources of inspiration, including Jean Vigo’s L’Atalante.

Speaking through a translator, Norstein addressed a wide range of subjects, including the realities of working in an artistic climate before and after Communism. “I always heard from my fellow artists that if we didn’t have censorship, we’d be able to create all these fantastic films,” said Norstein. “But then censorship disappeared, and there were no fantastic films.”

“We put together a proposal with images from his work, and talked about how important he was to both animation and the entire Russian culture, which the people in the Provost’s office really responded to.” said Brazhnik. “He has an unbelievable following, and that’s where we got really lucky in getting him here, because we found so many people, both here on campus, and in other cities, who were excited about him coming.”

Both Kelly and Brazhnik spoke about their personal connections to Norstein and his work.

“I didn’t discover him until I came here to USC,” said Kelly. “I grew up watching Disney films, but Hedgehog in the Fog was the first non-Disney film that really opened up my eyes to what animation was, and could be.” 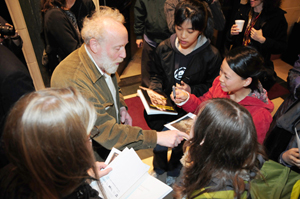 Norstein with students after screening

“For me, his films are the first films I remember watching. He did the animation for a lot of the Soviet kids television programs that we all grew up watching every night at 8PM,” said Brazhnik. “And that’s the first thing I ever remember watching and following religiously. Throughout every stage of my life, I’ve rediscovered his films and in each level of maturity, they’ve meant something new to me.”

The event culminated on Friday night, as attendees braved the rain for a screening of several of Norstein’s films, including Hedgehog in the Fog and Heron and The Crane, as well as a preview of the highly anticipated The Overcoat. Norris Theatre quickly filled to capacity, and overflow crowds viewed the screening via live feed from the Albert and Dana Broccoli Theatre in the SCA complex. The evening also featured a Q&A session moderated by Igor Kovalyov, award-winning director of The Rugrats Movie, and a former pupil of Norstein. A reception, held in the Mary Pickford Lobby, followed the screening.

Norstein, who earned the nickname “The Golden Snail”, for his perfectionism and the lengthy time frames of his projects, summed up his philosophy on the importance of total commitment to one’s work.

“If you have a choice of writing poetry and opening a store, you should open a store.”