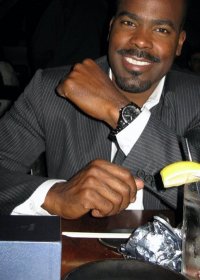 D’Marco Ray Smith, who graduated from SCA in 1998, and quickly forged a successful career as a sound supervisor and recordist, passed away Monday, February 1, following a long battle with cancer.

Smith worked in a variety of key roles in the sound department on productions such as Project Runway: All Star Challenge and The Apprentice, as well as numerous independent films. His 481 thesis film, Game, featured Billy Dee Williams in a prominent role.

“I was in awe of what he’d done in getting an actor like that for his film,” said Sheldon Candis, ’02, who met Smith shortly after coming to SCA. “I looked up to him and from that, we formed a bond.”

Meng Johnson, who served as an AD on Game, and worked with Smith on projects after graduation, spoke warmly about collaborating with his friend.

“He was great. He was detail-oriented, he was clear in his communication, he had a lucid idea of the aesthetic that he wanted to create and achieve,” said Johnson. “He worked with the crew and the talent really well, especially Billy Dee Williams. I was impressed at the comfort and rapport that he had with him.”

“We went through a lot of the same life moments together: work, film, aspirations, USC, personal, family. Our lives paralleled each other, and we really bonded on a deep, complex level,” said Johnson.

Candis related how Smith helped him during a difficult time, post-graduation. “He got me my first job in the entertainment industry as a PA on a music video. I was broke, and just down to eating peanut butter and jelly,” said Candis.

“But I called him up and asked for his help, and he got me a job. In spite of working toward the pursuit of his own dreams, he would take the time to help you go after your dreams. That says a lot about who he was as an individual, and it says a lot about the bond we have as having gone through the USC film school together, and how vital and cherished those relationships we develop in school really are,” said Candis.

Smith is survived by his wife, Kristal Ramin Smith. A wake will be held on Friday, February 5 from 4-7PM and the funeral will be on Saturday, February 6PM at 11AM. Both events are located at the Reseda Church of Christ, 7806 Reseda Boulevard, Reseda, California.