"The Desert of Forbidden Art" Written, Produced, and Directed by Cinematic Arts Professor and Grad

“I found these paintings rolled up under the beds of old widows, buried in family trash. These were forbidden works, by artists who stayed true to their vision at a terrible cost. 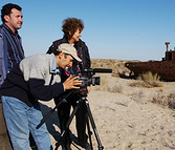 Cinematographer Gennadi Balitski, foreground, with Tchavdar Georgiev MFA '00 and Amanda Pope on location at the Aral Sea in Uzbekistan.

“It was a time of total control of the arts …”

So begins the narration by actor Ben Kingsley in the trailer for a remarkable documentary - six years in the making - written, produced and directed by USC cinematic arts associate professor Amanda Pope and cinematic arts grad Tchavdar Georgiev MFA ’00.

The Desert of Forbidden Art, which will have its world and West Coast premieres on Feb. 6 and 12 at the Santa Barbara Film Festival, is the story of one man against the odds. That one man was Igor Savitsky, who during Soviet rule in the 1960s, ’70s and early ’80s daringly rescued 40,000 fellow artists’ artworks and created a museum for them in Uzbekistan’s desert - one of the world’s poorest regions - far from the watchful eye of the KGB.

The paintings had drawn the wrath of the Soviet regime, and their creators had been sent to gulags or executed. Savitsky cajoled money to pay for the art from the same authorities who had banned it, saying he was buying state-approved works.

Savitsky amassed an eclectic mix of Russian avant-garde art and, astonishingly, discovered an unknown school of artists who settled in the Silk Road cities of Bukhara and Samarkand in Uzbekistan after the revolution. These artists found an Islamic culture that was as exotic to them as Tahiti was for Gauguin, and proceeded to develop an original style that included elements of European modernism and traditional Eastern art.

Today these paintings are worth millions and are still as imperiled as when they were rescued. Nearly all of them need restoration and they exist, the filmmakers said, “as a lucrative target for Islamic fundamentalists, corrupt bureaucrats and art profiteers.”

Georgiev and Pope stumbled upon the story when they were in the former Soviet Republic working on a documentary on grassroots reformers emerging after the fall of the Soviet Union.

A USC Zumberge Grant and funding from the National Endowment for the Arts and several foundations made it financially possible to make the film, but Pope credits Georgiev and John Bowlt, professor of Slavic literature and languages at USC College, for getting them access to this little-known corner of the world.

Bowlt, thanks to his international reputation and travels, knows all the heads of museums in Russia and had even visited the museum in Nukus, one of few Western art historians to do so. He was instrumental in helping the filmmakers navigate the Russian art world.

But uncovering the artists’ stories was difficult.

“Usually in a historic documentary where the main characters are no longer alive, filmmakers rely on diaries and letters, but in our story this was barely possible. The Soviet regime was so repressive that no one kept diaries,” Georgiev said.

Added Pope: “This is where Tchavdar’s Russian really was essential in tracking down what archival documents had survived, as well as the children of the artists and witnesses to the era.”

The filmmakers were able to get Kingsley, himself an art collector, to voice Savitsky’s letters and diaries. Sally Field and Ed Asner voiced the stories of the persecuted artists. Former New York Times correspondent Stephen Kinzer, who wrote the original news report about the collection, serves as the “everyman” in the film. He says on camera: “It didn’t take me more than a few minutes of walking around this museum for my jaw to drop.”

Marinika Babanazarova, the director of the museum, comments in the film on the sensitivities she faces in dealing with Russian art circles: “Russian museums can’t live with the idea that such a wonderful collection was taken out from Russia to this provincial place, somewhere in Uzbekistan, God knows where.”

Pope says of the film: “Artists often are the ‘canaries in the coal mine’ identifying the darker elements in society. Repression always starts with silencing their voices. In our film, we have a generation of artists whose masterpieces came close to destruction and only through the efforts of Savitsky and his followers were saved. The film is both a cautionary tale and a hopeful one.”

On the film’s Web site, www.DesertOfForbiddenArt.com, an “adopt a painting” link will be added in mid-February, when museum director Babanazarova will name 10 paintings in need of restoration, along with the price tag for restoring each. The monies will go directly to the museum via the nonprofit organization Friends of the Nukus Museum to make sure the funds do not go astray, the filmmakers said.