SCA Faculty Member for over 50 Years 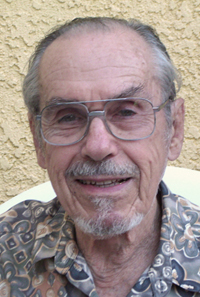 Longtime School of Cinematic Arts faculty member Professor Emeritus Mel Sloan passed away, January 12, from pneumonia, at his home in Van Nuys, CA, at the age of 86. Sloan served on the SCA faculty from 1946 until his retirement in 1997.

“Mel’s remarkable legacy will live on through the storytellers and scholars who had the privilege of studying under him at the School,” said USC SCA Dean Elizabeth M. Daley. “With a genuine commitment and enthusiasm for teaching, he trained and nurtured generations of students who have gone on to shape the art form and the industry.”

Sloan grew up in the Bronx, moving to Los Angeles in 1940 to study filmmaking at USC. With the outbreak of World War II, he interrupted his studies and joined the military in March 1943. He was stationed in Los Angeles and assigned to work in a film production unit under the direction of Pare Lorentz. Working with Lloyd Nosler, editor of the 1925 version of Ben Hur, his duties included editing aerial briefing films. In an interview for Reality Ends Here: 80 Years of Cinematic Arts by Michael Goldman, he spoke about his experience as a ‘cutter.’

“I would sit in and take notes of what he was telling the editors, who were all civilians, what he was telling the editors to do; adjusting the narration, putting in pauses, deleting pauses,” said Sloan. “And it dawned on me: this is the chess game. This is where it has to all fit together as if it were shot and intended to go together like that.”

Following the end of the war, he returned to USC to complete his undergraduate degree in filmmaking. Shortly thereafter, Sloan (who insisted his students call him by his first name) partnered with Herb Farmer, Dave Johnson, Gene Moriarity and Dan Wiegand. This group, which Moriarity jokingly referred to as the “Unholy Five,” was instrumental in the creation of the school’s production curriculum. Over the next 51 years, Sloan taught a wide variety of courses for both undergraduates and graduates, including classes in his specialty, editing. Thousands of USC cinema students studied under Sloan, and he influenced filmmakers Irvin Kershner, Randal Kleiser, George Lucas, Walter Murch, Gary Rydstrom and Robert Zemeckis, to name just a few. 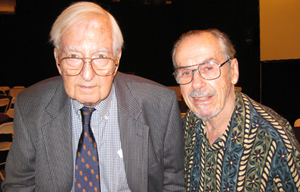 From left, Herb Farmer and Sloan

Sloan influenced the evolution of the beginning 290 Visual Communication course from a lecture class into a team-taught hands-on Beginning Film Workshop. Film students used simple cameras and editing equipment to produce five to seven short films every semester. In addition, students wrote, in about 25 words, what they were trying to say in their film and why they wanted to say it. Faculty and fellow students critiqued the films and the various—and often differing—perspectives provided valuable feedback and insight for the developing filmmakers.

SCA Professor Emeritus Woody Omens, who was both a student and a colleague of Sloan’s, spoke warmly about learning from and working with the longtime instructor. “He believed in leading his film students to places where there could be ‘teachable moments’ for him to seize upon,” said Omens. “These were moments where something in their films moved him. Responsively, he reached out and moved them. It became a case of mutual inspiration.”

“Because we were team teachers, working side by side in the same classroom, I saw
firsthand how Mel worked,” Omens said. “When students in our 290 class made their short films, he was in ‘teachable moment’ heaven. The opportunities to connect with them were boundless. But his real talent was in turning his moment around to a student’s own advantage. What had been his ‘teachable moment’ became their ‘discoverable moment.’”

Professor and Mary Pickford Chair Doe Mayer, who also both studied under and worked with Sloan, echoed Omens’ sentiments. “He believed in an emphasis on student-centered work, learning by doing, and on providing information to them at the point when they could use it to make their films stronger,” said Mayer. “He was a consummate professional, a talented editor, a caring and supportive colleague and an inspirational teacher.”

From the late 1940s to the 70s, in addition to teaching, Sloan also worked on documentaries and ethnographic films, two relatively new film genres at the time. In 1947-48, he worked as a producer and editor with ethnographer/cinematographer Conrad Bentzen on Mokil, a 60-minute documentary about how the people on a small and remote Micronesian atoll in the Pacific dealt with the effects of population pressures and the introduction of trade goods. Sloan also worked on some feature film productions, including Stakeout on Dope Street with producer Roger Corman, Irvin Kershner, cinematographer Haskell Wexler and production manager Gene Peterson, who later taught with Sloan. 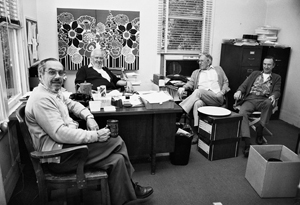 From left, Sloan with Dick Harber, Dave Johnson and Dan Wiegand, circa 1980.

Sloan was also very involved in the community, serving 25 years as a member of the Board of Directors for the ACLU-Southern California. He also was a training director for New Communications, a project that reached into African-American, Chicano, and Native American communities to teach filmmaking, and served on the L.A. County Human Relations Commission’s Communication Committee. He traveled the world (for pleasure and work) and enjoyed bonsai, square dancing and collected fine wine.

In the same Goldman interview, Sloan summed up a teaching philosophy that has served, and continues to serve, generations of SCA alumni and students well. “You can make a good argument that falling on your face is the best learning method there is. When you make a mistake, you learn.”

He is survived by Rita, his loving wife of 60 years; their three children, Jeff, Len and Barry; three grandchildren, Alyssa, Steven and Eric, and sister, Irene Golden.