Dr. Ed Catmull, co-founder of Pixar and current president of both Pixar Animation and Walt Disney Animation Studios, spoke to a packed house in the Ray Stark Theatre on Monday, December 7. 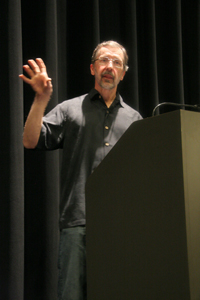 During the talk, which was focused on the creative process at Pixar, Catmull quickly pointed out that the studio’s remarkable track record was difficult to explain. “Our success is ultimately mystifying.” He went on to detail how, having set himself a long-time goal of completing the first full-length computer animated feature film, he found himself at a loss, following the creation of Toy Story.

“I had achieved my goal – now what?” Catmull said, “I decided that my next goal was to build a studio and a sustainable culture that would outlast me and John (Lasseter.)”

Having no business experience prior to the creation of Pixar, Catmull enlisted the services of a company that distilled the content of business books down to abstracts. “The problem was that the abstracts revealed that there was nothing there,” said Catmull. “They wanted to create a simple answer, but the problem with a simple answer is that it allows you to stop thinking.”

Elaborating on the problem of the “simple answer”, Catmull talked about a phrase he constantly heard in the film world. “Everyone always said how ‘story was the most important thing in movies. Story was king’,” said Catmull. “But it’s a tautology. Movies are stories, therefore how can story be the most important thing? It’s meaningless.”

During his initial business study period, Catmull also analyzed the life cycles of comparable Silicon Valley companies who, after promising beginnings, ultimately failed. “What happened to the magic?” Catmull asked. “If we were successful, would we make the same mistakes?”

While acknowledging that Pixar did make mistakes, Catmull offered his thoughts on factors that have contributed to the company’s success, including the embracing of those mistakes. “Fail early, fail often and learn fast,” Catmull said.

It was better to have a train wreck with model trains than with real ones.

He went onto detail how a Pixar short film, which cost $2 million, was an abject failure, but Catmull sees this as a learning opportunity, noting that the company had had the chance to realize that the director of the short was not ready to direct a feature film, an endeavor that would have cost considerably more.

“An animated film can cost $140 million to $180 million,” said Catmull. “Our take on it was that it was better to have a train wreck with model trains than with real ones.”

Catmull also highlighted Pixar’s process of “dailies”, where each day, collaborators show unfinished work to each other for discussion and critique. He compared the process to the way students show their work to teachers and fellow students, but said that often, after joining the professional world, the practice is abandoned.

“We have to train this out of people,” Catmull said. “If you can show your work and not worry about it, you become more creative.”

In contrast to the standard studio model, where multiple levels of oversight exist above a director, Catmull described Pixar’s “brain trust”, a group of vetted directors who meet to exchange ideas on projects, which exists only to provide suggestions for how a project can be improved. The director of the project ultimately has final say.

Catmull also contrasted the typical development process with what “development” means at Pixar. “Our development team doesn’t look for stories,” Catmull said. “Their job is to create teams of people that work well together.”

In a candid anecdote, Catmull related how Toy Story 2 ran into difficulties from the very beginning. “It went off the rails. We had planned to send it straight to video, but we quickly changed our minds. The idea of making a ‘B product’, while other people in the building were working on an ‘A product’ just didn’t work,” said Catmull.

While throughout his talk, Catmull decried the generalities and truisms, like the pointless quest for the “simple answer”, that plague both the worlds of business and art, he may have come closest to describing the secret to Pixar’s remarkable success with this statement about turning Toy Story 2 from a second-class product into an award-winning smash hit.

“We realized that having lower standards for something is bad for your soul.”