A Trojan For Over 70 Years

A Memorial Service has been confirmed:
Saturday, February, 6 at 2:00 pm at The Norris Theater
Reception immediately following.

"Herb was an absolutely essential part of the School of Cinematic Arts, and it’s difficult to imagine him not being here," said Dean Elizabeth M. Daley. "His devotion to the university, the school and the generations of students he instructed and inspired, is matchless. I am proud to have had him as a colleague and a friend." 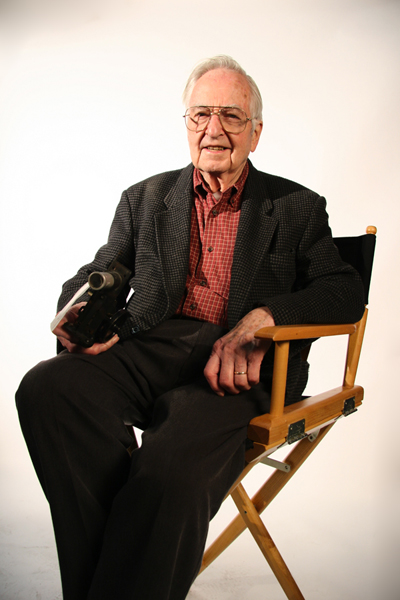 After making a cross-country trip from Buffalo, New York, Farmer began classes at USC in 1938, also finding time to produce the Trojan Newsreel, shoot football coaching films and surgical motion pictures for the university, and play sousaphone in the marching band.

A few months shy of his graduation in 1942, Farmer took over teaching a motion picture history class from a professor who had been called to active duty in World War II. Farmer, who also served in the war, returned to USC to receive his master’s degree in 1954 and began teaching classes in basic film technology and distribution. He had been involved with the university ever since.

At the time of his death, Farmer was still dedicated to overseeing his extensive archive of historical films and equipment ranging from zoetropes to the soundboard from The Jazz Singer, which he had gifted to the university. These materials are part of a rotating collection that is regularly put on display.

Farmer’s son, Jim Farmer, also a Trojan, often accompanied his father on his trips to the university. "As we would go through the new building, the words would always be the same: ‘Incredible’, ‘beautiful’, ‘wow’, ‘unbelievable’, ‘fantastic’, ‘I wish I could go back to school.’"

At a September 2008 celebration of Farmer’s 70 years of ongoing service to the university, Farmer spoke warmly about his time as a Trojan. "It’s been a wonderful life working with students here at the school," he told the audience. "I’m grateful for the time that I’ve been able to put into it. And I’d do it again if I had to or could."

Farmer is survived by his son, his former daughter-in-law, Michele Himmelberg Farmer and granddaughters Casey and Lindsey, a senior SCA production major.

Founded in honor of Professor Herb Farmer who was with the school for 71 years, the fund will support the school's extensive archive which includes student films, historic cameras and memorabilia.

Make a Donation to the Bea and Herbert E. Farmer Endowed Fund