As Peter Stark Program Chair, Larry Turman echoes in his book So You Want To Be A Producer, “Part of producing is about being a detective…doing homework….having information.”

Producers and other filmmakers need information, and Baseline StudioSystem trades in information. The company contributed to this natural alliance by donating use of the online database to the Peter Stark Program students.

Entertainment industry information has never been more popular, and Baseline StudioSystem, with over 20 years experience and now part of The New York Times Company, has become the information source of record in the entertainment industry. This subscription database now also has data syndication and licensing solutions deliver content to several leading information outlets including Yahoo!, E! Online, Comcast, Variety, New York Times, and Bloomberg Media. The company’s customer base includes every major studio, broadcast network, representation firm and media outlet in North America, as well as producers and production companies.

“Baseline is an invaluable tool for me that I use constantly on a daily basis,” said Producer and Stark alumnus Andrew Licht ’81 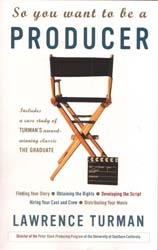 who introduces the database to Stark students in their first semester during his Producing Symposium class. “It is a must have for an industry professional.”

Taking advantage of the database’s exhaustive tracking of industry people, companies and projects, the students quickly get to know who’s who in the industry and what kinds of projects are getting made. As they establish a slate of projects they wish to develop, students can see what similar projects have been produced or are in development. They can identify companies who might be a good home for that project, or find which agencies/agents represent talent they might like to attach.

“It’s a great informational tool and knowledge of StudioSystem has proven to be a great asset to me, especially throughout my summer internship,” said current Starkie Noah Weinstein, noting the benefits of his access to the database “enables me to compose director, writer and actor lists quickly.”

A one-stop-shop for valuable information, Baseline StudioSystem makes it invaluable for Starkies throughout their career, from the first weeks in the Stark Program to preparing their thesis project to setting up their company or working in development post-graduation.

“Baseline StudioSystem has been an invaluable resource and addition to my education,” said Emmeline Yang ’07. “Being able to access the same information as the industry allows all of us to communicate and compete as professional producers."