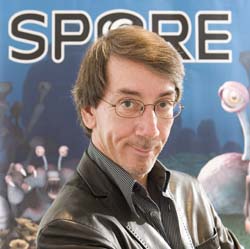 Interactive media pioneer, engineer and writer Will Wright, whose Sims game series is recognized around the globe, will be the featured speaker at the USC School of Cinematic Arts 2007 commencement ceremony on Friday, May 11.

The appearance of Wright, who co-founded the Maxis software company and serves as its chief designer, underscores the broad range of the artistic and scholarly endeavors underway at the school, which is a leader in film, television and interactive media.


"Will is a true innovator, setting the standards not only for electronic games, but the entertainment arts as a whole,” said Dean Elizabeth M. Daley.

“From the Sims, which puts players in charge of the lives of its neighborhood world, to Spore, which gives users the ability to create their own content, Will continually challenges convention and encourages all of us to do so as well.

Wright will be the first commencement speaker since the school was renamed last October after a record-breaking $175 million gift from alumnus George Lucas. Wright will also address the first ceremony to be held in USC’s Galen Center, which opened last fall. Commencement exercises begin at 2 p.m., with a reception to follow at the school at 4 p.m.