Susana Ruiz, a Ph.D. candidate in the interdivisional Media Arts and Practice (iMAP), will take her unique expertise in designing games that address pressing social issues to Japan this summer, when she represents USC at the 2009 Doctoral Students Conference of the Association of Pacific Rim Universities (APRU). The conference, which will be held in Kyoto from July 6 – 10, gives an opportunity for doctoral students from a wide range of universities to meet and share knowledge across all disciplines.

"It's very exciting to have Susana attending this conference on behalf of the Media Arts and Practice program," said Assistant Professor Steve Anderson, who is the iMAP director. "Her research represents an extremely interesting hybrid of scholarly work and creative production."

Ruiz earned her M.F.A. in 2006 from the Interactive Media Division and has been working with media that is computational and interactive for the past six years. Games she has developed include Darfur Is Dying, which received critical acclaim from experts, won numerous prizes, and garnered the Academy of Television Arts & Sciences' prestigious Governors Award. Her most recently completed project, RePlay: Finding Zoe seeks to address gender stereotyping.

At the conference, Ruiz will present research regarding the notion of documentary games.

"As game theory and the practice of making games become recognized across a broad spectrum of disciplines, we see forthcoming a movement specific to a new genre—documentary gaming—which will position game systems within a framework that questions the practice, ethics, and identity of games," Ruiz said.

Her research asks the following questions: Can documentary practices help us negotiate the socio-political and cultural significance of a game? Do the same ethical concerns and the validity of the "truth claim" affect games the way they have historically influenced the efficacy of documentary and journalistic media? How may designers, filmmakers, and activists collaborate to advance and diversify the space?

"Susana is deeply engaged in an emerging field of study and creative practice that is sometimes termed 'Serious Games,'" Anderson said. "In her work, Susana aims to bring together the most powerful aspects of interactive media design with a rigorously researched approach to issues of social justice." 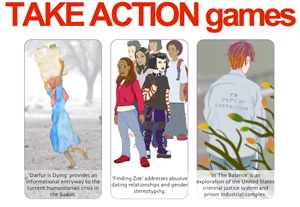 Founded in 1997, APRU is a consortium of 42 research universities (among them USC) along the Pacific Rim. The APRU aim is to promote scientific, educational, and cultural collaboration among Pacific Rim economies.

In addition to the APRU conference, Ruiz has presented at six other conferences and festivals, including the Games for Change Festival and the Sundance Film Festival New Frontiers. She was also invited to speak to members of the U.S. Congress about Darfur is Dying.