The past, present, and future of Hollywood converged on January 10, 2009 as faculty, staff, and students got their first look at the brand-new School of Cinematic Arts complex. Over 400 guests attended the beginning of the semester open house and took the opportunity to comb through the George Lucas and Steven Spielberg buildings, which comprise the main components of the new complex.

With a design that hearkens back to the Italianate architecture popular with film studios in the early part of the 20th century, the two main buildings rise above a sweeping courtyard named in honor of the Academy of Motion Picture Arts and Sciences, which partnered with the university 80 years ago to begin the USC cinema program.

The structures house theaters, classrooms, and office space, all of which have been vastly updated from the previous cinematic arts building, but Dean Elizabeth M. Daley was quick to point out that the buildings themselves were only part of the equation.

"This is a truly magnificent space, but the way it will realize its full potential is through the people who will, by working
here, transform it into a training ground for a new generation of storytellers and scholars," said Daley, following a trumpet fanfare courtesy of the Trojan band. "Brick and mortar alone don’t make a cinema school: you, the brilliant faculty, staff, and students, are what makes this a cinema school."

Construction on the 137,000-square-foot complex began immediately after the formal groundbreaking event on October 4, 2006. On January 12 of this year, a mere 832 days later, students began their first day of class.
After the official ribbon-cutting ceremony with Daley and the department chairs, guests enjoyed refreshments and toured the complex. 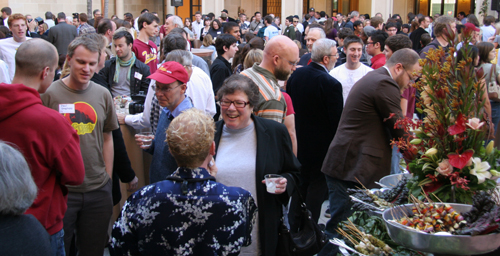 On the subterranean level of both buildings is the post-production area, including sound dubbing stages, editorial labs and classrooms, and ADR and Foley stages. The first floor of the complex features a lavish 200-seat theatre, as well as two digital theaters and a combination screening room/sound dub stage. Both the Lucas and Spielberg buildings have large open lobby areas named for cinematic greats, Mary Pickford and Harold Lloyd, respectively.

Level two of the complex houses the interactive media division, the offices for the Summer Program and Student Industry Relations, and features two screening rooms, five classrooms, a graduate student lounge and numerous rooms for student group meetings. Offices for production, critical studies, writing and the Peter Stark program are all housed on the third level, along with communications & public relations. Two more screening rooms are on the third floor, along with several informal gathering areas for students and faculty. The office of the dean, along with production faculty and external relations, can be found on the fourth floor.

"The word that occurred to me was grand," said Associate Professor Pamela Douglas, when asked to describe the new complex. "The wonderful thing about a grand façade like this is that it has a celebratory feeling in terms of how wonderful we think the cinematic arts can be, how much we value them, and how much potential there is."

Acknowledging the current economic climate, Douglas made a connection between today and an earlier period that was, paradoxically, a golden era for American cinema. "Movies, especially during the Great Depression, were this fantasy, this possibility of things to come and meant that even in the most difficult of times, you could be entertained, you could enjoy and be inspired by beauty and stories," said Douglas.

"The building is even better than I could have imagined," said Veronica Flores, B.A. Theatre '07, who minored in production and served on the Trojan Vision team. "You see the drawings and mock-ups, then you see it in real life, and you say, whoa! That’s pretty cool."

Flores was particularly struck by the integration of the design with the rest of the architecture on campus. "It seems like they put the buildings up really fast, but it doesn’t look like it popped up over night. It really feels like it's been here forever," she said. "Except nice and shiny and new."