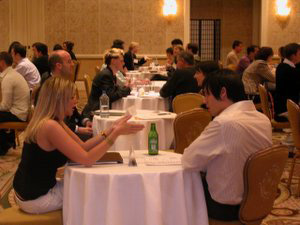 “Solid, compelling stories are the heart of any great film or television project and these students have certainly created an impressive lineup in all genres,” Daley said. “First Pitch offers unique access to new ideas and approaches from our undergraduate and graduate writers, all in one place at one time,” she added.

First Pitch 2008 is sponsored by Albert Friedman and the Samuel Friedman Foundation. Since its inaugural session in 2002, First Pitch has drawn representatives from some of the entertainment industry’s most prestigious firms, including  CAA, William Morris, ICM, UTA, Paradigm, Endeavor, Fuse, Management 360, Sony, Paramount and Thunder Road, to name but a few. The format features a series of rapid-fire five-minute sessions in which the soon-to-graduate writers advance from table to table for meetings that match their stories with the specific interests of the industry representatives.

The invitation-only event will take place at the Four Seasons Hotel in Beverly Hills beginning with appetizers and hors d’oeuvres at 6:00 p.m.