Riding a wave of success that recently garnered him second place honors at the 29th Annual College Television Awards, Preston DeFrancis ’07 screens his award–winning thesis film, The Big Production at First Look 2.0.
“I wanted to make a film that was personal, yet had an epic, sellable and unique quality to it,” said DeFrancis who co-wrote The Big Production with Writing M.F.A. Trysta A. Bissett ’05. “There’s so much going on in the film and the goal was to keep the story simple, entertaining and fun.”
Combining multiple film genres that include sitcom, musical, mystery and more into a movie revolving around an elaborate event staged by a young man who hopes to propose to his girlfriend, The Big Production takes on the stylized point of view of each character when the group of friends each relay how the engagement ring goes missing. The love struck suitor must piece together the wildly divergent stories to gather the clues, find the culprit and 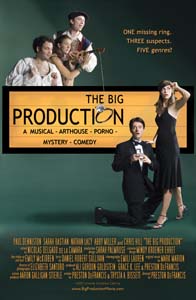 “The concept was really intriguing,” added DeFrancis, noting that though finding the right actors was made easier from casting his other short films at USC, securing the musical role posed the most challenge since he was looking for someone that “not only had to be able to act, but also had to have a phenomenal voice.”

Save for a few short exterior scenes, DeFrancis and his crew shot The Big Production entirely on Stages D and E at the Robert Zemeckis Center for Digital Arts.

“We didn’t have the luxury of being a big-budget movie like Babel where you have the comfort of audience members sitting through your film and trusting that they’ll discover where things are headed,” DeFrancis said. “We had to do better from the start and get people hooked right away.”

From being named a winner of the Student Groundbreaking Award at the annual art and film festival Hatchfest to The Big Production chosen as the pre-feature short to the closing night selection at the Ojai Film Festival to March 15 when the Academy of Television Arts & Sciences awarded him second place in the comedy category along with a $1000 cash prize, DeFrancis’ unique approach to his story has paid off tremendously.

“I’m inspired by the success of people I know,” said the director, who entered his film in the Emmy competition after the accolades received at the same event two years ago by 2005 production graduates Borga Dorter, Trent Jones, and Samantha Reynolds for their short, Love Letter. “I always like to remember what they’ve accomplished, and at the same time strive to achieve that same honor.”

Admitting that the red carpet experience “was crazy after watching them on television and then actually being there,” DeFrancis is currently developing a feature comedy/romance while he works full time as an executive assistant at HBO Films.

“I’m drawn to comedies that all come from a basis of truth,” he said mentioning films such as Election and Sideways. “My film is a heightened reality and one I really hope audiences can identify with when they watch.”

With his film selected as one of the top six of the First Look 2.0 festival by a professional jury thereby making it eligible for a  special invite-only screening event at the Directors Guild of America on April 2, how does DeFrancis feel talking about his thesis film?

“I’m not a parent, but The Big Production is like my child. At the end of the day I love it for what it is, and it’s flattering that people want to hear about it because I love sharing it.”