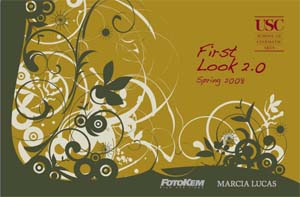 The hottest films to come out of the School of Cinematic Arts this year will hit the big screen during the First Look 2.0 festival, taking place at the Norris Theatre Complex from March 28 – 30. And for the first time ever in its history, the festival will present juried award winners at all of its screenings, including a Special Awards Ceremony at the Directors Guild of America (DGA) on April 2.

“Since its founding, First Look has been a showcase for cinematic excellence,” said Larry Auerbach, associate dean of the Office of Student Industry Relations, which is hosting the festival. “This year we’ve raised the bar to an even higher level, with members from our prestigious faculty, as well as industry leaders from our Alumni Council, recognizing the best of the best.”

In addition to the faculty and industry judges, people attending the Norris screenings—which are open to the entire USC community and the public at large—will be able to vote for their favorite selection to win the Audience Award.

First Look 2.0 will kick off on Friday evening with a feature film. On Saturday and Sunday, the 46 films competing in the festival will split into six programs, three per day, with very diverse genres and stories. Celebration receptions for filmmakers and guests will follow in Queens Courtyard at the entranceway to the Norris Theatre Complex.

Faculty members from across the school will host each of the festival screenings, as well present Artistic Awards within their concentrations. The categories include: cinematography, sound, editing, writing, directing and producing. Winners will be announced after each full program.

The recipient of the Audience Award will be announced and the film screened at the Special Awards Ceremony taking place at the Directors Guild of America (DGA) the following Wednesday, April 2.

The DGA event will also feature screenings of the six top films picked by a special four-member jury drawn from the school’s Alumni Council. These six titles will be in the running for “Outstanding Film,” and second and third place.

In conjunction with the awards ceremony, First Look 2.0 will also see the inauguration of the school’s Entertainment Leadership Award. The prize, which will be conferred upon an honored alumnus/alumna or renowned industry figure, will serve to underscore that individual’s unique support, vision and dedication to the industry and the school.

This DGA evening will be an invite-only event for industry professionals, supporters and friends of the USC School of Cinematic Arts with a catered reception to follow.