While the Writers Guild of America (WGA) strike is having an immediate impact on current television and film scribes, SCA students and recent alumni learned during a special forum hosted by the Writing Division that it can have long-term consequences on them as well.

“Taking those offers will undercut the strike,” said Furia, who also served as the WGA West president from 1973-1975. “I’ve seen a number of people who’ve succumbed to that and had their reputations sullied and they deeply regretted it.” If such an offer does come, Furia urged the audience members to thank the people making the proposal “and contact them the day after the strike is over.”

The two-hour event, which was moderated by Associate Professor and Chair of the Writing Division Jack Epps, Jr., also included Professor Howard A. Rodman, who serves on the WGA West Board of Directors and is founder and co-chair of the guild’s independent screenwriters’ caucus.

An invitation to take part in the forum was extended to the Alliance of Motion Picture and Television Producers (AMPTP), but the organization declined to send a representative.

Furia, who clearly described himself as not being neutral on this issue, said that he fully expects signatory companies—those 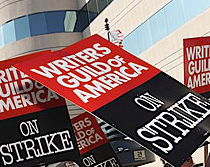 that are part of the guild’s over 400-page contract—to call the school’s students for work.
Furia mentioned that even though students may seemingly work for an independent company, “it’s totally a matter of your conscience on what you produce. I would encourage and urge you to think of the importance of your career. Once the strike is over, people who have violated the rules will not be thought of kindly. We are out there making the sacrifice for the future—a future that most of us will not see the benefits, but your generation will.”

Following up, Rodman suggested that if writing students are collaborating with their counterparts from the Peter Stark Producing Program on projects while the strike endures, the authors should put in writing that “no material of mine may be sold, optioned or in any way end up with a signatory company.”

The strike, which began on November 5, involves several issues. Among the most salient are extending guild coverage to writing for the Internet, cell phones and other new media; residuals for reuse on new media; the home video (DVD) residuals formula; and are “committed to bargaining a fair and reasonable contract that benefits both parties.”

When the panel was asked how long they saw the picket lines lasting, Furia said, “It will be over when the economic pressures as well as the enlightened self interests on both sides recognize that the price of the strike is too great.”

The evening began with Rodman providing a brief history and details concerning the “long and arduous process” it took to form the guild as well as the outcomes of the organization’s previous strikes. Specifically, he pointed out that in 1960 the writers relinquished residuals on everything prior to that year with the understanding that they would be justly compensated for their labors from that point forward.

Recalling the time nearly two decades ago when the guild went on strike for 22 weeks, Epps note the emotional dynamic around this labor action is quite different from 1988.

“The division among the writers themselves back then was so deep,” Epps said. “Today, there’s solidarity and the sense of the guild being united. I believe that we’ll hang in there whatever it takes. We can’t afford to lose. If we give up there will be no future.”

Though prospects for a settlement in the near future seem dim, all three speakers urged the audience members not to neglect their passion for writing.

Rodman summed it up best, adding, “This is about the relationship between the writers guild and the companies. Not the one between you and pardon the expression, your typewriter.”