Academy-Award winning director Robert Zemeckis ’73 delivered an early holiday present to the School of Cinematic Arts with a special screening of his adaptation of the classic Old English epic Beowulf in Leonard Maltin’s 466 course on November 1 followed by a benefit premiere of the film on November 5.

Brought to the screen using performance capture technology and hitting theaters this weekend in a trio of formats including standard 2-D, 3-D and Imax 3-D, Beowulf is Zemeckis’ live-action reinterpretation of the classic poem that tells the tale of a sixth-century hero and the consequences surrounding his fame after battles with the monster Grendel, the monster’s vengeful mother, and years later—a dragon.

“The script was so different and so good, yet we could never get the project off the ground,” Zemeckis told the nearly 400 students who packed Frank Sinatra Hall to share the unique experience of being the first-ever audience to view the film. “I bought the script 10 years ago and when I was making The Polar Express I thought, ‘this is how we need to make Beowulf.’”

When asked if he had to invent new technology to do the film, Zemeckis said the project hinged on writing new computer programs. As an example, he explained the process of electro-oculography—where EKG sensors placed on the skin adjacent to the eyes are connected to a Palm Pilot that reads the electrical signals emitted by the eye muscles of the actors.

Saying how the project “shows what the absolute extreme of the art form is,” Zemeckis referred to the digital enhancement of 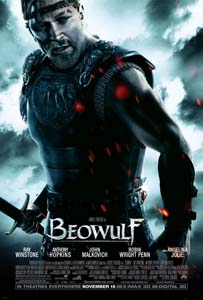 the film’s lead actor Ray Winstone, who had nearly eight inches added to his frame to transform him into the story’s perfectly built six-and-a-half foot hero.

“I couldn’t think of whom I could cast if I were making this movie in a traditional 2-D way,” Zemeckis said, adding that Beowulf took a year and a half to complete after the actual performance capture was done in roughly 28 days. “With this technology, I was able to get the best actor with the all the power, emotion and animal kind of essence required for the role.”

Listing the benefits of the technology including “not worrying about capturing the mic in the shot,” and being able to spend “95 percent of my time talking to the actors,” the film was shot using the Vicon MX motion capture system—the same cameras featured in the inaugural semester of “CTAN 599: Motion Capture Performance,” which the director taught to 12 graduate students last spring.

Harking back to how different it was directing his 1988 hit Who Framed Roger Rabbit, Zemeckis said he doesn’t refer to Beowulf as animation.

“Here, I’m directing actors and with my layout team I direct the camera,” he added. “I love this art form, and I’m committed to it and want to see it stand on its own. You get the best of both worlds and have absolute control over the cinematic arts.”

The celebration of Zemeckis’ achievement continued during the week. First, friends and supporters of the school were invited to the November 5 Los Angeles premiere of Beowulf, with both Paramount Pictures and Shangri-La Entertainment graciously donating portions of the proceeds to the school’s Robert Zemeckis Center for Digital Arts. That was followed by the school’s special reception and demonstrations of Vicon’s motion capture technology at the House of Moves in Los Angeles on November 12.

“I know a lot less about this process than I do about making a traditional movie,” admitted the director. “Yet, this medium also affords you the ability to use the traditional tools of filmmaking in conjunction. Only now, it’s just that I’m in an air-conditioned office instead of hanging off of some ridge in the middle of the night in northern Denmark.”