1960s Madison Avenue advertising firms would be the last place you’d expect to look for the truth, but with his new hit Mad Men, Matthew Weiner ’90 has tapped an emotional current that transcends the decades and exposes the reality of life then and now.

“People are changing, but not changing. That’s the message of the show,” said Weiner. “World events are world events, but personal events are something else and that’s what the show is all about,” he added.

Weiner, who made the documentary about Hollywood’s paparazzi It’s All True while completing his M.F.A. in the production division, has long had an intense interest in discovering and depicting what makes people tick.

It’s a curiosity that has fueled his rise as one of the industry’s leading scribes, beginning with The Naked Truth, followed by Becker, Andy Richter Controls the Universe and then The Sopranos. The latter landed him two Emmys, one of which he brought home the night before Rosenberg’s class. 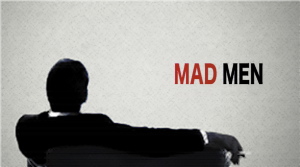 Weiner wrote Mad Men as a spec in 2000 when he was on Becker. His inspiration for the program, which is the first dramatic series AMC has ever created, comes in part from large-screen productions of the era, such as Billy Wilder’s The Apartment. “I love advertising, it is the sexiest job of this period,” Weiner said.

Awash in three-scotch lunches and chain smokers, Mad Men takes place in 1960 focusing on the inner workings of the fictional Sterling Cooper Advertising Agency. Its lead character Don Draper struggles with the demands of constantly being on top of his creative game to keep clients appeased and younger colleagues from taking his job. He also wrestles with issues of fidelity—to his wife and family in the suburbs; his mistress in town; and the woman at the helm of one of his newest accounts.

“My questions about marriage are about fidelity as a major issue for life,” Weiner said. “One of the overarching themes about the show is that sex—sexual intercourse in particular—means something. There are always consequences.”

There are also consequences for trying to launch a period piece—most notably a “no” from studio execs prone to nixing added location, costume and research expenses.

But going back in time is essential to the show, according to Weiner, who believes a good portion of the dramatic tension stems from debunking the idea that the era was pure conservative bliss.

“The country, then as now, is divided exactly down the middle, red and blue,” Weiner said, pointing to the fact that in 1960 Beat Generation writers had already penned landmark works; Jack Kennedy was challenging the Eisenhower/Nixon status quo; and the movement for equality—on gender and racial fronts—was gaining critical mass. “I show what’s now by showing what we were.”

Besides the crisp scripts that Weiner and his five-person writing staff generate, Mad Men derives strength from painstaking attention to production detail.

In creating sets, Bishop said one of the keys is to avoid an idealized version of the past. The Drapers’ kitchen, for example, isn’t brimming with ’50s-era Jetson-esque fixtures. Rather, it features knotty pine that was in vogue years before, showing people have lived in this house for some time.

“I’m here to make sure that what is written and what is presented all come off as well as it can,” Bishop said.

The same goes for wardrobe. Bryant has assembled an extensive line of original and reproduction items, but she intentionally limits character costume changes. Repeating clothing combinations shows that “these people actually have closets,” Bryant said.

With AMC’s recent greenlight for the second season, Weiner’s plan is to pace the show so that each season represents two years of historical time.

“I don’t want the program to go as long as possible,” he said. “I want it to go until I’ve exhausted the machinery that tells the story.”