With some of Hollywood’s biggest blockbusters to his credit, Peter Stark Program alumnus John August ’94 has long enjoyed prominence in the upper echelons of Hollywood screenwriters. Now the man behind the words of such hits as Big Fish, Charlie’s Angels, Corpse Bride and Charlie and the Chocolate Factory is set for a whole new experience when his directorial debut The Nines opens in Los Angeles and New York  on August 31.

“I want audiences to feel a little befuddled,” August said when describing the impact of his latest work. “People’s opinions of this film will shift in the days after they watch it,” he added when asked how to explain the movie without giving away the plot. “At its heart is the question of the creator’s responsibilities to his creations, and at what point are you allowed to walk away from what you’ve done?”

Starring Ryan Reynolds (Blade: Trinity, The Amityville Horror), Hope Davis (Infamous, Charlie Bartlett) and Melissa McCarthy (Go, Gilmore Girls), The Nines, which was produced by 1992 Starkie Dan Etheridge, showcases the actors playing three different roles in a trio of short films—although all is not as separate as first suspected.
In describing his new directing role, August admits he never sought to use his talent as a stepping-stone to sit behind the camera, adding he remains very much a writer first. “This film was a story I really wanted to tell and I just knew there was no way someone else was going to be able to direct it.”

Using his Los Angeles home as one of the shooting locations, August was more nervous about the disruption to his neighborhood than with the mechanics of making a feature film. 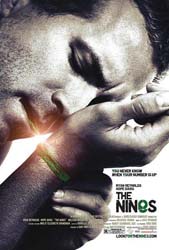 “It’s a marathon and you need endurance,” he said about the process, with a nod to his days at Stark and the experience he gained there that has helped him throughout his career. “I learned the nuts and bolts of filmmaking and had a specialty. If you try too much to be hyphenated, people don’t know what to do with you. Stark gave me the vocabulary I needed to ask the right questions and how to figure out the challenges I’d face along the way. I came out of USC a writer and that was very helpful.”

Although people have offered projects for him to helm in the past, the newly minted writer-director said he never felt any pressure to do it all.

“I can write four movies in a year but I can direct only one, so it’s a huge sacrifice for me,” he added, laughing that despite the fact The Nines was the one film he felt passionate about directing, he now realizes “what a luxury it is to be just a writer.”

No stranger to press junkets, August is relishing the attention that being a director has given him on the publicity circuit. “Generally the writer takes a backseat, and my role has usually been to provide commentary on the DVD releases,” he said. Now that the coverage and screenings of The Nines is in full swing since its initial Sundance debut, he admits that he’s fully switched gears from scripting (Hancock and Shazam! are two of his 2008 projects) and running his screenwriting informational Web site and he’s now “in the headspace needed to promote the film.”

With a hectic schedule that takes him from Austin to Venice and then back to Los Angeles for the film’s opening at the Nuart Theater and subsequent plays at Laemmle's Sunset 5 and One Colorado (among other theaters), August points out that he’s learned to relinquish his tendency to micromanage. “I recognize where I have to let go,” he laughed.

Among all the stops he’s made for his film, one of the places he’s most looking forward to appearing this fall is USC, where he serves on the school’s Alumni Development Council.

“I’ll try to be honest about what works and what doesn’t,” he said referring to his film’s upcoming screening in Leonard Maltin’s 466 course. “But I’ll warn the kids in advance that The Nines is going to be uncomfortable. There are a lot of questions that aren’t really answerable, but that’s what’s so great about it. Movies invite dialogue and a lot of times there are no answers, just a lot of interesting questions.”