The Power Of Love

USC Grads Capture The Heart Of The Student Emmys

When a love letter ultimately wins the girl’s heart, along with a student Emmy, it’s a sure sign that something besides amour is in the air for three USC filmmakers.

On March 19, the Academy of Television Arts & Sciences Foundation named Love Letter the best film in the Children’s Programming category at the College Television Awards, celebrating the work of producers Borga Dorter and Samantha Reynolds, who graduated from the production M.F.A. program in 2005.

“It was great to be honored,” said Dorter about the prize of $2,000, a screening at the Goldenson Theatre in North Hollywood and an industry mentor that he and Reynolds landed as a result of the competition. “But Trent was the driving force behind the project. The way he was willing to creatively involve us really added to our experience.”

The 17-minute short was by directed by fellow M.F.A. classmate Trent Jones, and written by his wife Cynthia.

“I connected immediately with Trent’s film,” explained Reynolds about her decision to come on board. “I thought it was the best student film that was presented to us.”

Despite the logistics involved in a story featuring child actors, animals, stunts and one of the hardest locations to obtain for a movie shoot—an elementary school, Dorter pointed out that it was the story’s well crafted script that helped both producers see past the filming obstacles. “If it wasn’t so well written, it would have been daunting.”

“When you’re going to direct, you want to get the best people you can, and I knew Sam and Borga were both solid producers,” Jones said, adding that Love Letter, his thesis film was the perfect follow up to his previously much darker Croak, which is set to premiere at this year’s First Look festival on April 18. “Since my wife and I were inspired by the birth of our daughter, we were looking to make a film that would be joyous and kid friendly.”

That magical combination was found via the hanging love verses on the trees in the Forest of Arden in Shakespeare’s As You Like It, which the film transforms into a 7th grade boy’s humiliating experience of a having his love letter fall into the hands of the school bullies. 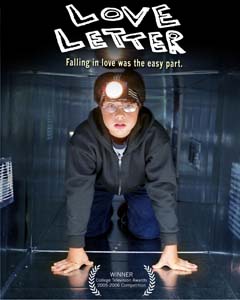 “To have this much fun on a film and to win an award on top of it is pretty cool,” laughed Jones, who recently wore his producer hat for Wentworth, directed by R. Stephen Suettinger ’04.

“We’ve been fortunate that all our films have done well, especially since we just graduated,” said an elated Reynolds, whose thesis documentary Back To Life won a CINE Golden Eagle Award, which recognizes high-quality professional production in student and amateur works.

“If you agree that someone is going to take care of this task and that, you have to trust that it will happen,” said Dorter who cites the key to his partnership with Reynolds is their trust and communication—an observation he laughs that he’ll have to remember when the two get married. “No matter what your relationship, though, you shouldn’t have to double check with your partner. USC taught us how it all works and how knowing everything from editing all the way up to directing plays an important part in your success.”

Jones is currently working on transforming his tale of young love angst into a children’s series. In the meantime, the recognition by the academy has put the team at the forefront of the industry.

“In some ways this is such a small town, and in others it’s so large and vast you don’t know where to go,” explained Reynolds. “Love Letter just didn’t win us an award, it’s helped all of us get a foot in the door.”