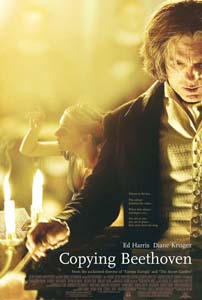 As pirates and superheroes usher out the summer, one film about a musical genius is set to take audiences back in time. Copying Beethoven produced by the Division of Film & Television Production Chair Michael Taylor (Phenomenon, Instinct), Sidney Kimmel, Stephen J. Rivele and Christopher Wilkinson, centers on the turbulent relationship the masterful composer shares with his beautiful young copyist, Anna Holz as the maestro struggles to complete the composition of his magnum opus, Symphony No. 9. The film stars Academy Award-nominated Ed Harris (Pollock, The Hours) in the title role, along with Diane Kruger (Troy, National Treasure) as the fictitious Anna.

“I was really drawn to the script and how it attempts to study musical genius that really hasn’t been expressed on screen before,” said Taylor about the film, which was penned by fellow producers Rivele and Wilkinson. “In particular what the music means in literary terms rather than musical.”

Reversing the polarity of the producing process, Taylor chose director Agnieszka Holland (Europa, Europa) and cast the two principals before obtaining financing. “I think it’s helpful to have at least one actor attached to a project if you attempt to finance a film independently because they become the magnet for the money,” Taylor added.

In addition to casting, from scouting locations and hiring the cinematographer to the key hair and make up positions, Taylor feels involvement in every aspect of filming is “an important part of the process.” In fact, Taylor’s cinematic workload required him to travel numerous times to Hungary and the United Kingdom during the film’s production.

“I work hard and juggle a lot of balls,” he said when asked how he managed to balance his producing duties on the film with those of a pilot for CBS in addition to his USC responsibilities.

Now, four years from when he was first introduced to the script, Copying Beethoven makes its world premiere at the 31st Toronto International Film Festival, which runs from September 7-16. The movie is also featured in Spain’s San Sebastian Film Festival later that month. Coupled with the already positive buzz the movie is generating across the Internet, Taylor’s art house film seems like it’s already on its way to becoming a hit.

“We can only hope so,” he laughed. “But, I’ll tell you in October when it opens.”