Growing up in Orange County, Josh Greene ('22) received a video camera from his parents as a Bar Mitzvah present and immediately began filming himself and his pals as they surfed the waves. He saved the footage. "I always knew it would come in handy someday," says Greene, and in fact, the home movies came in very handy this year when excerpts served as an entry point to his short film Waves Apart. Nominated for a Student Academy Award, the 25-minute documentary explores how Nazi ideology tainted California surf culture from its very inception. One of seven Oscar finalists chosen from 1,496 submissions, Waves Apart will be vying for the gold, silver or bronze medal to be announced [later] in September.

Greene talked to me about the secret history of surf Nazis and the collaborators who helped make his vision a reality. Waves Apart begins with your personal connection to surfing. Can you recap?

I fell in love with surfing because on land, I was kind of an outcast. Being one of the only Jewish kids in school, I found solace in the water. When I got my camera at thirteen, we started making surfing movies because we wanted to film our waves on camera to show everybody.

Your Bar Mitzvah party at the San Clemente Surfing Heritage and Culture Center turned out to be a pivotal experience in more ways than one, right?

The museum had surfboards [decorated] with swastikas. They were the first mass-produced surfboards made right here in California. My parents moved them out of sight for the Bar Mitzvah and only years later did they tell me. Once I found out about these swastika surfboards, it forced me to dig deeper. Waves Apart references the 1959 beach movie Gidget, which, many people probably don't realize, was based on a Jewish surfer girl whose family emigrated from Nazi Germany…

Only to encounter anti-semitism in their own backyard.

On the upside, you got to interview great Jewish surfers like Israel Paskowitz.

Before we embarked on the film, I didn't know about Israel Paskowitz, who came from this legendary family of surfers that did Shabbat on the beach wherever they went, proudly and openly. Making this film was a journey for me where I discovered my new Jewish surfing heroes.

When did you start making the documentary?

In the spring, people pitched ideas for senior thesis projects and I was one of three directors chosen. At that point, the school gave us a budget and provided us with a Canon C300. My roommate Jack Lattin did the cinematography. That camera basically became an extension of Jack's hand because he was always ready to capture whatever we needed.

The crew also included student producers Aslan Dalgic and Ela Passarelli along with editors Liam Mills and Elizabete Sadauska. It looks like you also featured a few classmates in front of the camera?

Yes. In the film, Mason Matalon talks about seeing a swastika at his favorite surf break in San Diego. I met Mason when we were both on the USC surf team. He had a list of Jewish students who'd expressed interest in learning how to surf. I emailed all of them and heard back from five or six. We met on the Malibu beach, surfed together and prayed in the water together, which we shot with a GoPro camera. It was our most ambitious day. 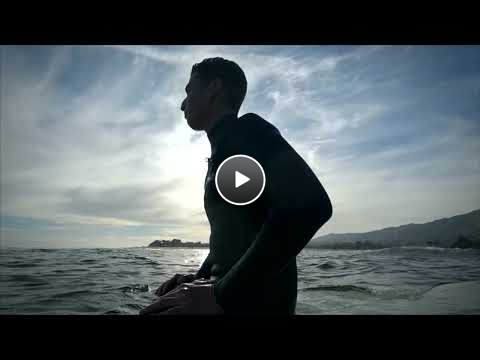