Mike Nicoll '12 is an award-winning documentary filmmaker, driven by telling stories that reveal the power dynamics inside American culture, sports & business. He is best known for writing & directing At All Costs - a feature documentary acquired by Netflix in 2017. Hailed by the LA Times as “a modern-day Hoop Dreams”, the film explores life inside the shadowy underworld of AAU basketball. In 2021, Mike adapted the film into a docu-series, LYNCHPIN: Inside the Business of Basketball, for the Eleven Sports Network. With a decade of experience directing projects for clients that include Nike, 21st Century Fox, Facebook and CNBC, Mike joins us to discuss his latest project, Lynchpin, and a career in sports filmmaking. 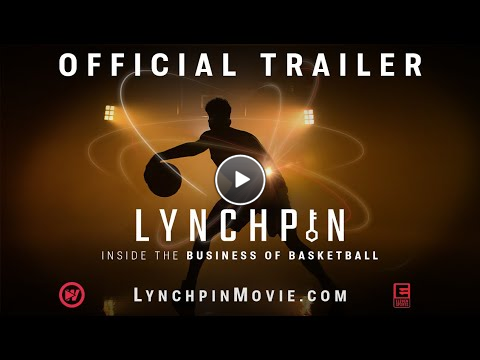 You began with a degree in Global Media and Psychology. Why did you decide to pursue a further education in film?

I’ve always been fascinated by human behavior. The only two career paths I ever felt inclined to pursue were clinical psychology or filmmaking - and I believe my undergraduate degree in psychology was itself an exploration of character motivations. After I graduated from Michigan, I think deep down I knew I wanted to be a filmmaker - but I was afraid to jump into the deep end of that pool. Having grown up in LA, I understood how daunting a career in the Entertainment business could be…and I wasn’t fully ready to square up with that yet. So I took a marketing job in Chicago as some sort of safe, fear-driven compromise. Six months of working that miserable job was all it took to convince me that chasing something I loved was worth whatever uncertainty came with that choice. That was the moment I decided to apply to USC’s Cinema School and go all-in on a career in filmmaking.

How did your education prepare you for your career today?

Beyond the world-class technical education that SCA provides, the biggest thing that prepared me for my career today is the network, fellowship and community I built while I was at USC. The people I met - both my fellow students and the faculty members - remain integral parts of my collaborative circle to this day. Being a part of the USC Film family means having access to willing & brilliant collaborators who are invested in my success…and that’s a priceless resource for anyone in this business.

You have not always been in the sports industry. Can you tell us about your transition from traditional film entertainment to sports films?

When I arrived at USC, I felt a lot of pressure to be a scripted, narrative director. Looking back, I understand that all of that pressure was self-imposed. But at the time, at only 23 years old, I felt like pursuing the Spielberg route was what you should do when you get into USC’s Film School! During the summer of 2010, I landed a job as a P.A. in Wally Pfister’s camera department on the Moneyball set. On the surface, I was thrilled…but the day-to-day experience was an unhappy one. I tried to convince myself I enjoyed working on a big studio set like that, but I didn’t. That was a disconfirming experience until I finally gave myself permission to consider alternative paths - which is when I really found a home in the documentary space.

From there, the more I learned about story archetypes - the more I began to appreciate that the only “original” ideas were stories that are deeply personal. As I was finishing up at USC, I understood that my first professional ‘feature’ needed to be a story that I could tell better than anyone else. And that was what led me to developing At All Costs: Life Inside AAU Basketball - which began my foray into sports content.

What drives your passion for American sports?

The passion was born from a life spent playing basketball at high levels, but from a storytelling standpoint - it’s the stakes, the unlikely friendships, and the meritocracy. Very few things in life are as objective and uncompromising as sports; you can’t cheat the game, you can’t short-cut the hard work, and you can’t fake the competitive spirit. To my eye, sports both teach and reveal character…which is what makes them such fertile ground for storytelling.

From a socio-cultural standpoint, the way America does sports is unique and endlessly fascinating to me. With both Lynchpin & At All Costs, these were stories I was compelled to tell because they exist in a grey area where Corporate America is colliding with ‘the streets’. All of America’s core values are on display - in both admirable and unsavory ways. Both projects explore the idea of what makes a “professional” athlete - where and how that status is conferred. I was always driven by smashing whatever remaining illusions my audience had around “amateurism”...this is America, we do healthcare for profit, we do prisons for profit…what makes you think we don’t, or shouldn’t, do youth sports for profit?

There have been significant changes in recent years with amateur athletes and NIL (Name, Image, Likeness) rights. Do you feel that sports documentaries like yours have contributed to these changes in shining a light on athletes’ situations?

Yeah, without question. I think it’s Hemingway’s Law of Motion…change happens gradually, then suddenly. A little bit at a time, and then all at once. The collective impact of powerful films in the genre brought a lot of pressure to bear on the conversation.

I do take some pride in being ahead of the curve in the basketball space specifically - and I do believe At All Costs was ahead of its time. During the stretch we spent trying to adapt At All Costs into the television show that ultimately became Lynchpin, public opinion caught up to the reality on the ground pretty quickly. There’s no doubt that the FBI investigation into the AAU world - which is the launching point for Lynchpin, played a role in the Supreme Court’s NIL ruling…and, proud as I am of At All Costs, Lynchpin is really the story I wanted to tell all along.

I believe Lynchpin is my finest work to date, and I’m very proud to have it out in the world. There’s not another documentary in existence that combines our unique level of access with the star-power of our cast…Hammer to Nail called Lynchpin “a real-life version of [Steven Soderbergh’s] High-Flying Bird”, which is an apt, and humbling, comparison if you’ve seen that film.

You work in a lot of documentaries. How do you maintain the validity of these individuals’ stories while creating something entertaining?

For me that work mostly happens in the casting process. Casting is as important - if not more important - in documentaries than it is in scripted, narrative content. I understand that my subjects are not actors - so I don’t ask them to act or be somebody that they’re not. Once I’ve identified a story or theme I want to explore, it’s on me to go out into the world and find compelling people whose lives speak to the story I’m looking to tell. From there, it’s about building trust with them such that they feel comfortable being honest and vulnerable on camera. I try to put everyone involved in my projects at ease - and in positions to do what they do best. That applies to the cast and my crew…if I do that, it’s been my experience that creating something entertaining happens naturally.

How do you balance telling stories authentic to you and your values with telling a story that will appeal to audiences?

One of my core values is embracing my powerlessness. Ironically, there’s real power in that. Most people delude themselves into believing they have control over a lot more than they actually do - maybe to help them sleep at night, which is fine. But I fundamentally believe that there are only two things I have any real control over: my attitude and my action. So I work hard to keep sunlight on my attitude, which allows me to operate fearlessly. Fear is a real killer for any creative, so I try to mindfully un-shackle myself from it on a daily basis. I have no control over what audiences will find appealing, but I do look for stories that are relevant to modern life and have something meaningful to say about our shared experience. Beyond that, I try to keep things simple and trust in my ability to tell a universal story…because in the final analysis, the film exists on screen - but it truly lives in my audience’s mind.

Has capturing these stories given you a new perspective into American sport culture?

I think over time I’ve gotten less cynical about the culture - and life in general. When I was starting my career - I think I was out to shine a light on how shady, corrupt and problematic big, corporate systems are. But one thing I’ve learned is that the solution to a problem is very rarely contained within the problem itself. Very often, the solutions live on the fringes, outside the boundaries of the problem…and I’ve found that when I take a step back and try to live more in the solution, I’m able to shift the Rubik’s cube in surprisingly useful ways. The kaleidoscope of possibilities is richer than we generally think because we’re so convinced we’re right about everything…convinced that our ideas are the right kind of ideas. So over time I’ve learned to set myself aside, be more curious, and see a fuller picture. That willingness has changed my perspective a lot.

What advice would you give those wanting to pursue sports filmmaking?

“The most important thing a person can know is that they don’t know.” I think hanging onto a childlike wonder of things, prioritizing an intellectual humility…to be weary of becoming a ‘closed-system’ that has all the answers. Especially if you’re fortunate enough to have some early success or wield a degree from a prestigious school like USC. Every new project is a maiden voyage all its own, so be open to all the possible miracles.