USC Casden Institute, Outside the Box [Office], and MSNBC Films,
invite you and a guest to attend 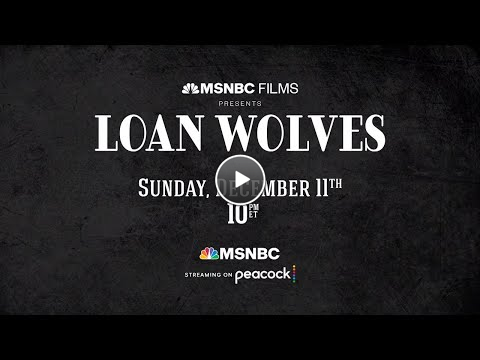 LOAN WOLVES is a feature documentary that follows Blake Zeff as he travels the country to uncover the effects of student loan debt and investigates WHO quietly snuck through two lines in the 1998 education bill, making student loans the only debt in America that can never be forgiven or erased through bankruptcy, contributing to the largest student loan debt crisis in history. Using personal stories and humor, Zeff ultimately uncovers and confronts the unimaginable culprit that set everything in motion.

This is an unforgettable and revealing documentary about the secrets underlying America's democracy and featuring interviews with the nation’s most powerful politicians including Representative Ayanna Pressley, Senator Dick Durbin and Senator Chuck Schumer.
Running time: 90 minutes.

Blake Zeff is a filmmaker who's worked at the highest levels of politics and investigative journalism. As a senior aide for President Barack Obama and Sen. Chuck Schumer, he saw first-hand the inner workings of the U.S. government and campaigns. He developed a Conviction Review Bureau for the New York Attorney General's office, described by the New York Times as "the first statewide initiative by a law enforcement agency to address potential wrongful convictions." And for his work on campaigns, he was hailed in a profile by the New York Daily News as a “secret election weapon.”

As a journalist and filmmaker, Zeff created a ground-breaking mini-documentary spotlighting a water poisoning scandal in rural upstate New York, as well as a subsequent cover-up by the state government. After the exposé was released, state hearings were called to probe the government’s response. The former politics editor of Salon, he also reported for some of the nation's best-known publications including Vice, GQ, Politico, and BuzzFeed.

This is his first feature film.

Amanda Spain joined MSNBC Films in 2021 as the Vice President of Longform Acquisitions. Revitalized under MSNBC President Rashida Jones and Amanda Spain, MSNBC Films, distributes a slate of dynamic documentaries, including The Turning Point Series Executive Produced by Trevor Noah, Memory Box: Echoes of 9/11 which premiered at the Toronto International Film Festival, Love & the Constitution, Four Seasons Total Documentary and the award-winning Paper & Glue, a project by acclaimed French artist JR. Before joining MSNBC Films she was the Director of Non-Fiction for Blumhouse Television. Other recent credits - Executive Producer Pray Away, Exposure, Producer - Television Event, On the Divide, After Antarctica, and Art & Krimes by Krimes. In addition to her most recent credits, Amanda produced the audience favorite and award-winning documentary Bathtubs Over Broadway, which was nabbed by Focus Features, as well as a number of films, shorts, and series for numerous outlets including Netflix, ESPN, A&E, PBS, MTV, Discovery, and the Sundance Channel. She was a 2016-2017 Sundance Producing Fellow and is a current member of the Producers Guild of America (PGA) & the Academy of Television Arts & Sciences (ATAS).

Alan Collinge is the founder of StudentLoanJustice.Org. Created in 2005, this grassroots organization is dedicated to informing the public about the predatory underpinnings of student loans in the United States.

StudentLoanJustice is credited as the inspiration for current legislation, as well as The Student Borrower Bill of Rights, and has broken numerous news items in the press with its research findings regarding conflicts of interest in the student loan system, Student Debt levels, Default Rates, corporate lobbying, and other areas.

Alan and SLJ have been featured on 60 Minutes, 20/20, The News Hour, CNBC, Fox News, and many other television programs, print media including the New York Times, Wall Street Journal, Washington Post, Fortune Magazine, The Chronicle of Higher Education, and many others, as well as numerous radio and internet broadcasts.

He is the author of The Student Loan Scam (Beacon Press) and was selected as one of seven “Financial Heroes” by CNN/Money Magazine in December 2008.