Outside the Box [Office], Participant, and Greenwich Entertainment,
invite you and a guest to attend

A Special Dolby ATMOS Screening of “Character is at the heart of ¡Viva Maestro! — Dudamel’s personal character and the character of his music making…what you see is what you hear, and that’s what makes him and the movie riveting.”
- Los Angeles Times/Marc Swed

“In ¡Viva Maestro!, Ted Braun’s celebratory doc, the audience will be enmeshed in the glory that is Dudamel…For those who love classical music and art, ¡Viva Maestro! is a film for you.”
- POV Magazine/Marc Glassman 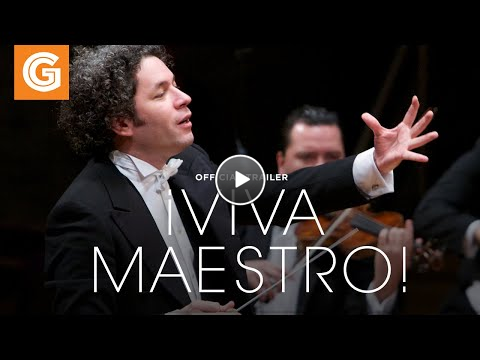 When conductor Gustavo Dudamel’s international tours are disrupted by deadly protests across his native Venezuela, one of the world’s greatest and most beloved musicians faces the challenge of a lifetime —one that will deepen his commitment to the mentor who changed his life, upend relationships with friends and musicians he’s led since his teens, and test his belief in art’s transformative capacity. ¡VIVA MAESTRO!, the uplifting and timely new documentary from acclaimed director Ted Braun, follows Dudamel around the world as he responds to these unexpected and daunting obstacles with powerful music-making and an innovative and triumphant concert that celebrates the power of art to renew and unite.

Writer-Director Ted Braun’s feature documentary, ¡Viva Maestro!, about conductor Gustavo Dudamel, premiered in 2022 - his second film with Participant which co-financed Darfur Now. Darfur Now was named one of 2007’s top five documentaries by the National Board of Review, won the International Documentary Association’s Emerging Filmmaker Award and the NAACP Image Award. His docu-thriller Betting On Zero received a WGA nomination for best feature documentary of 2017. Braun teaches screenwriting at USC’s School of Cinematic Arts and is the Joseph Campbell Endowed Chair in Cinematic Ethics. In 2018 Variety named him one of the world’s Top Ten Teachers in Film and TV.

Kate Amend is the editor of two Academy Award®-winning documentary features—Into the Arms of Strangers and The Long Way Home—as well as a recipient of the International Documentary Association’s inaugural award for Outstanding Achievement in Editing. Amend also received the 2001 American Cinema Editors’ Eddie Award for Into the Arms of Strangers and edited the 2001 Oscar®-nominated short On Tiptoe: Gentle Steps to Freedom.

Amend was nominated for an Emmy® for “The Case Against 8,” a film that was an award winner at the 2014 Sundance, South by Southwest and RiverRun film festivals. Her recent credits include
the Netflix series “The Keepers” and “Feminists: What Were They Thinking?” as well as HBO’s “Foster” and the Apple+ series “Visible: Out on Television.”

Amend is a member of the Board of Governors of the Academy of Motion Picture Arts and Sciences and has been an advisor at the Sundance Institute Documentary Edit and Story Lab since 2004. She is on the cinema faculty at USC and in 2016 Amend received an honorary doctorate from the Academy of Art University, San Francisco.