The Los Angeles Premiere of Followed by a Q&A with Dr. Rebekah McKendry, PhD
Moderated by Elric Kane

Premieres August 18th only on Shudder 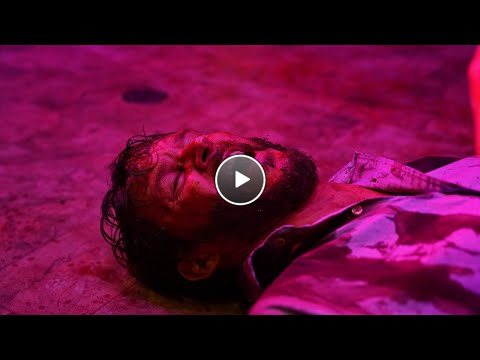 Spiraling out after a bad breakup, Wes (Ryan Kwanten) ends up at a remote rest stop miles away from civilization. His situation worsens after he finds himself locked inside the bathroom with a mysterious figure (J.K. Simmons) speaking to him from an adjacent stall. As Wes tries to escape, he finds himself an unwilling player in a situation bigger and more terrible than he could possibly imagine…

Rebekah McKendry is an award-winning director, writer, and podcaster with a strong focus on the horror genre. She most recently co-wrote the BRING IT ON horror reboot coming soon from Universal. Rebekah began her film career producing heavy metal music videos for Nuclear Blast and Metal Blade and went on to direct many award-winning shorts films and multiple horror features. She has a doctorate in Media Studies focused on the Horror Genre, a MA in Film Studies, and a second MA in Performing Arts Education. Rebekah previously worked as the Executive Editor-in-Chief at Blumhouse Productions and as the Director of Marketing for Fangoria Entertainment. She is a co-host of Blumhouse’s award-winning Shock Waves Podcast and co-host of Fangoria’s Colors of the Dark Podcast. She is also a faculty member of the University of Southern California’s School of Cinematic Arts specializing in the Horror Genre and Directing.

Elric Kane is a co-host of the Fangoria podcast ‘Colors of the Dark’ as well as the New Beverly Cinemas ‘Pure Cinema’ podcast. Prior to this he hosted the podcasts Shock Waves, Killer POV and was the producer of the live streaming video show ‘Inside Horror’. In addition to the podcasts Kane is an Independent filmmaker, the Chair of Film at Hussian College Los Angeles and former owner of the cult movie hang out the ‘Jumpcut Cafe’. He also played Lizardman in the straight to video film Lizardman but that’s a long story…

A f’n pandemic. Definitely didn’t see that one coming, but there I was trapped at home, along with the rest of the world, eternally wearing sweatpants and feeling imprisoned, cathartic, and having the worst existential crisis of my life. And that’s when GLORIOUS was created. Joshua and Dave’s script immediately resonated with everything I was going through- isolation, reflection, and a darkly sardonic perspective on our meager lives as we Zoomed into work and tried to make banana bread. I felt this script with every fiber of my sweatpants-laden body and knew I wanted to see the project brought to screen.

GLORIOUS speaks to my adoration of Lovecraft, gore, absurdist humor, philosophy, and the type of transgressive movies that leave you thinking “I can’t believe I just saw that.” It is a wild mix of horror, humor, and heady moralistic concepts about our own existential realizations of who we really are, forcing each of us stare into our personal abyss. And sometimes, the abyss stares back... and maybe has a favor to ask.

AMC Networks’ Shudder is a premium streaming video service, super-serving members with the best selection in genre entertainment, covering horror, thrillers and the supernatural. Shudder’s expanding library of film, TV series, and originals is available on most streaming devices in the US, Canada, the UK, Ireland, Germany, Australia and New Zealand. For a 7-day, risk-free trial, visit www.shudder.com.

This screening is free of charge and open to the public. A reservation confirmation will automatically be sent to your e-mail account upon successfully making an RSVP through this website. Doors will open at 7:00 P.M.